BENEFITING FROM THE EXPERIENCES AND TEACHINGS OF PAST MASTERS -- OVERVIEW 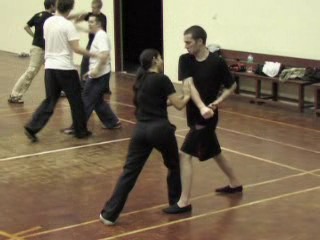 When we practice an individualized art like Boxing, we benefit from the experience and teaching of our immediate teachers, and sometimes our teachers' teachers. If a teacher discovers some effective counters against certain attacks, for example, he teaches them to his students. Other practitioners would have to discover these same techniques afresh.

But when we practice an institutionalized art like Shaolin Kungfu, we inherit the experiences and teachings of tens of thousands of masters over many centuries. When we learn some effective counters, these were not discovered or re-discovered by our immediate teachers, or their teachers. The techniques were discovered long ago from direct fighting experience by past masters who incorporated them into the art, and these techniques were refined over time.

The experiences and teachings of tens of thousands of masters were refined and generalized into principles. For example, past masters discovered both the concept and the methods that if an opponent was much stronger than you, you needed not match his strength with equal strength. You could use his strength to defeat him. This concept was formalized into a combat principle, poetically described as “Borrowing an opponent's strength to strike him”. Some methods used to implement this principle included striking the weak point of his on-coming attack, like using “Immortal” against “Golden Star”, and “shallowing” his attack and simultaneously striking him, like using “Hand Sweep” against “Precious Duck”.

The Secret of Cross-Road Lock Hand 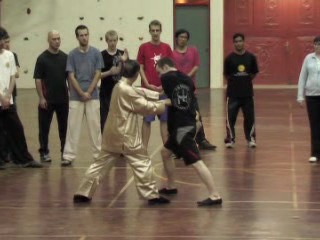 Here is a secret of “Sap Tzi Kow Sau” or “Cross-Road Lock Hand” You can lock both arms of an opponent while striking him. Do you know how to defend against or counter this attack? It is very simple, and it involves a principle which can be very useful in daily life when you are faced with an apparently impossible situation. 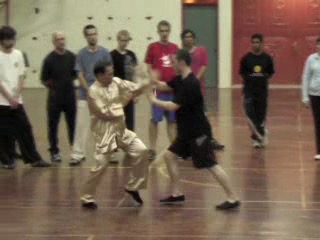 A skillful exponent can easily press an opponent with continuous attacks. Can you remember what the important points are when you use pressing attacks. Most important, you must ensure your own safety. Next, you must be very familiar with the movements you are going to make. This is taken care of by your combat sequences. You must of course have good force, good timing and good spacing.

The Importance of Skills over Techniques 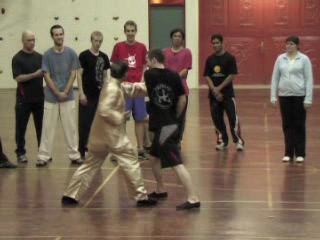 Here is the technique of interception. The impromptu changes are so smooth and spontaneous that many people may not notice them. This requires much skill. You can also notice Sifu Jamie smiling away, perhaps at the fun of being overwhelmed by Grandmaster Wong, or perhaps at the opportunity of learning a new skill. Having fun is a constant feature in our Shaolin Wahnam training.

The Profundity of Simple Movements 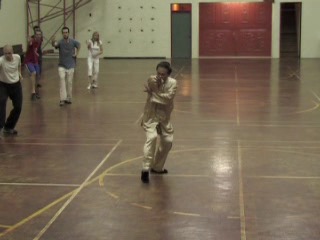 Shaolin kungfu movements are simple, but there is much profundity in the simplicity. An example is found in this video clip. You have performed these movements many times, especially after Combat Sequence 5 onwards. Did you know that herein lies the secret of interception?

The Importance of “Shen” or Spirit 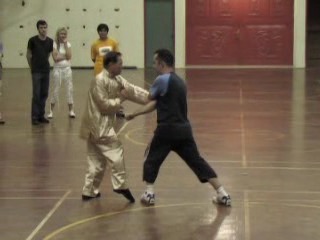 Merely knowing the counters is insufficient in good kungfu combat. You must have “shen”, or spirit. Grandmaster Wong demonstrates the response of a practitioner without much “shen”. “Shen” or spirit is present in the second example. Notice that Andy almost succeeds in breaking through Grandmaster Wong's first “closure”, but Grandmaster Wong “tames” him again, so smoothly and spontaneously that many people may not notice. 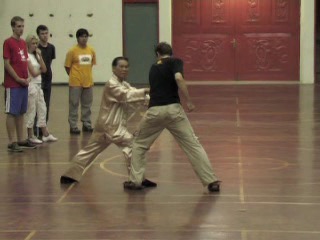 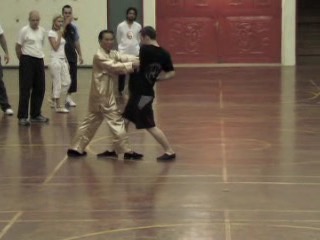 Helping One Another in Shaolin Wahnam Training

The opening, closing or intercepting technique of the Tiger Claw in “Single Tiger Emerges from Cave” is similar to the threading technique of the Dragon Hand Form in “Golden Dragon Plays with Water”. This video clip shows Sifu Jamie helping Bernadette with the Dragon technique. Helping one another is an important aspect of our Shaolin Wahnam training.