BASIC PRINCIPLES AND TACTICS OF COMBAT 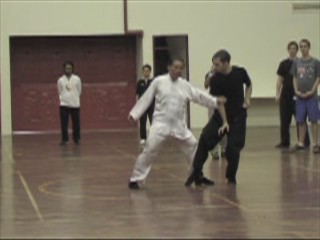 Firstly we ensure we do not give away disadvantages of ourselves to our opponents. Next we exploit the opponent's disadvantages if any. If no advantages are present, we create them. There are various principles and tactics to help us realize these three fundamental steps in combat.

Before we attack we must have four modes of preparation. We prepare ourselves guided by six harmonies, access our opponents, seek or create an opening, and move in swiftly with adequate safety. We ask the way, closing or opening the opponent's defence. And our attack is made with three arrivals.

In our defence we ensure right timing and right spacing. We use minimum force against maximum strength, employing techniques like leaning and threading. We lead an opponent's attack to futility, and counter-strike before he can recover, or we directly counter without first defending.

The video clips below illustrate some of these combat principles and tactics learnt and practiced at the Intensive Shaolin Kungfu Course in Sabah in March 2007. 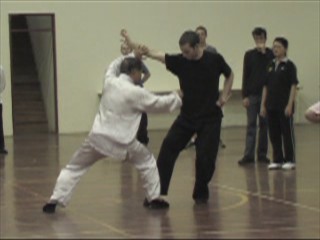 Grandmaster Wong floats Sifu Jamie's guard-hand and attacks the latter with “Precious Duck Swims Through Lotus”. In this situation, Grandmaster Wong has spaced himself so that Sifu Jamie could not strike him with his other hand. But without moving his feet, Sifu Jamie can change the spacing by just turning his waist. 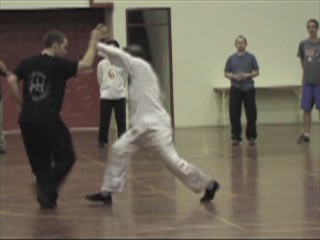 Grandmaster Wong moves in to attack Sifu Jamie using “Precious Duck Swims Through Lotus”. Sifu Jamie counter-attacks with the pattern “False-Leg Hand Sweep”. This is the tactic of “no defence direct counter”.

Intercepting a Side Attack 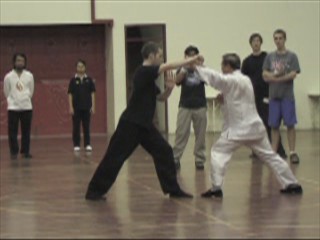 A good counter against a side attack is to intercept it. Here Grandmaster Wong employs the pattern “Immortal Emerges from Cave” to intercept Sifu Jamie's “Hand a Golden Star”. Notice that it is not a block. Blocking a powerful horn-punch may result in the defender's arm being broken, but intercepting it may break the attacker's arm,

Moving too Fast or too Far Away 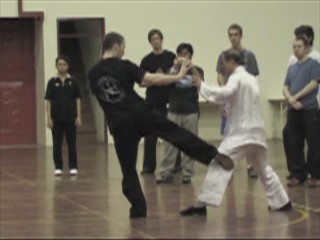 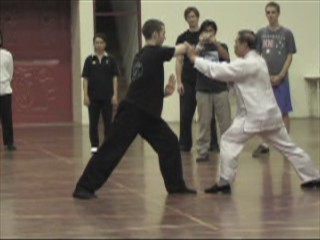 Grandmaster Wong illustrates how you may break an opponent's arm using the interception technique. Timing and correct angling are important. If his attack has passed you, then brush it away. 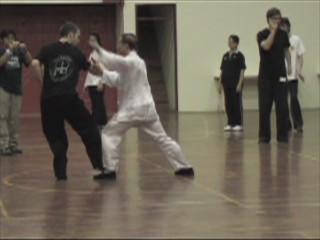 How would you attack your opponent with a left horn-punch when you start from the “Lohan Asks the Way”? Thread with your right hand, guard his hand, then strike him with your left hand.

Defending against an Opponent's Left Horn-Punch 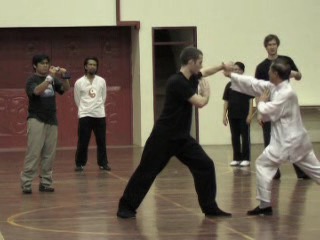 Your opponent has tamed your front right hand and attacks you with a left horn-punch. How could you defend against it when your front hand has been tamed? Simple. Just move back a step, and your front hand would be released. If the horn-punch has passed you, brush it away instead of intercepting it. 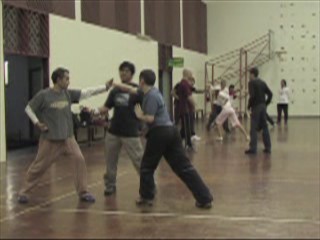 Instructors help students to refine their performance. Paul's attack, for example, has no threat, which is an important element in an attack. By improving on spacing, Sifu Wong Chun Nga shows how Paul could threaten Alejandro in his attack.

You can view all all the videos above here