LET MERCY FLOW FROM THE HANDS 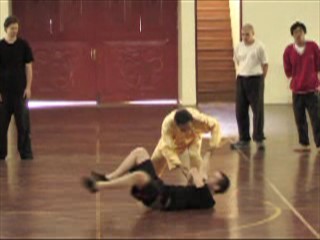 Grandmaster Wong could have broken the opponent's spine with an over-the-shoulder throw, but he lets mercy flow from his hands and just rolls the opponent across his hips

One often thinks of Judo and Wrestling when talking about throws and other felling techniques. But what many people may not realize is that Judo and Wrestling are sports protected by safety rules. If one forgets this in a real fight where no holds bar, it can be dangerous. Moving in to grab an opponent to prepare for a Judo throw or Wrestling take-down expose the exponent to deadly counter-strikes.

As genuine, traditional kungfu is trained for real fighting and not just for sport, a kungfu exponent must always ensure safety first before attempting to execute any felling or other attacks. On the other hand, while we are prepared for an opponent's deadly attacks, we avoid hurting our opponents as best as we can. This is enshrined in the saying “sau ha lau cheng”, which means “let mercy flow from the hand”.

Being Maimed Even Before the Throw 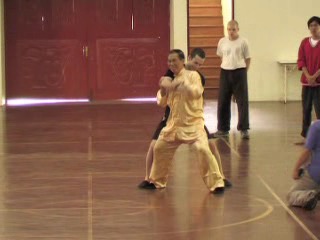 Some serious mistakes some martial artists make when attempting an over-the-shoulder throw, or any throw. The opponent's free hand can gore the eyes, tear the throat or grip the groin. These are deadly strikes and gripping attacks.

How would You Prevent these Deadly Counter-Attacks? 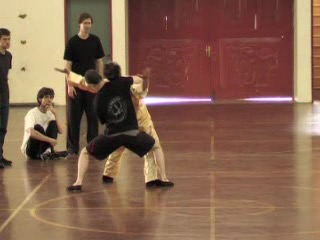 The danger of not covering an opponent when attempting a throw is now shown from another angle. The opponent could dislocate your neck, choke you or apply other deadly locks. How would you prevent these deadly counter-attacks when you wish to throw your opponent over the shoulder? 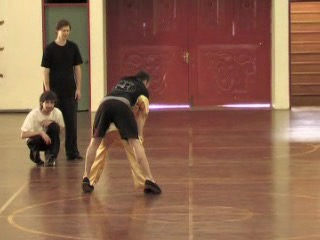 You could lock the opponent's arms before throwing him over the shoulder. This could also dislocate his elbow. An over-the-shoulder throw, executed with the pattern “Farmer Hoes Rice Field”, may break the opponent's backbone resulting in paralysis — something that we do not want to happen even to our opponent. But why are the participants in the video laughing? Obviously it is not for breaking an opponent's backbone.

Let Mercy Flow from the Hands 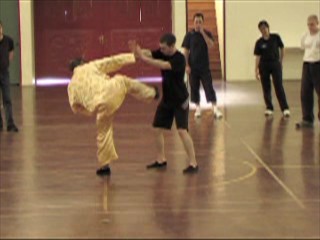 Save Emperor with Single Whip 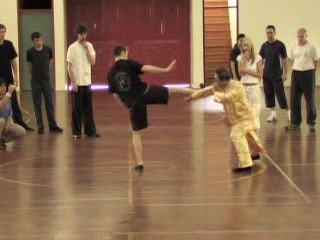 The roles are now reverse. Grandmaster Wong attempts to throw Sifu Jamie over the shoulder. Sifu Jamie rolls over and executes a side kick. Grandmaster Wong retreats to a Riding-Dragon Step, which is a variation of the Bow-Arrow Stance, to avoid the kick and simultaneously strikes the kicking leg using “Save Emperor with Single Whip”. Sifu Jamie moves away. Grandmaster Wong moves in with a palm strike, and Sifu Jamie threads away using “Golden Dragon Plays with Water”. 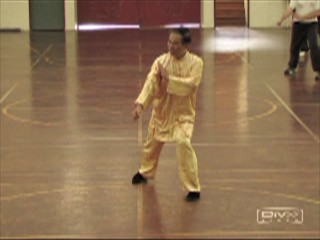 In Shaolin Wahnam, the Bow-Arrow Stance is performed with both feet in line. But in this variation of the Bow-Arrow Stance, called Riding-Dragon Step, two feet are far apart. Why is this so. It is because this gives the best advantage for the combat situation in question. If the feet are in line as in a normal Bow-Arrow Stance, the practitioner would be unable to strike the kicking leg. It is called a “step” instead of a “stance” because the poise is transitional; a “stance” indicate a more permanent poise. 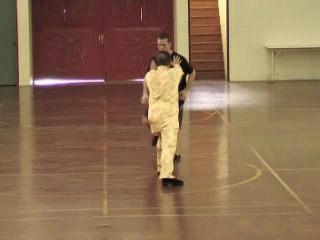 Another felling technique is pushing. The push is from the back leg, not from the shoulders. This pattern is called “Fierce Tiger Pushes Mountain”. It is important to cover the opponent's hands when pushing to prevent possible counter-strikes.

Counter-Attacking with a Thrust Kick 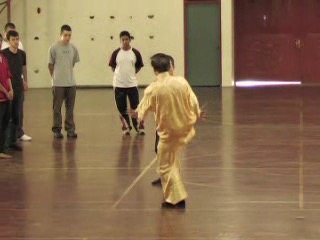 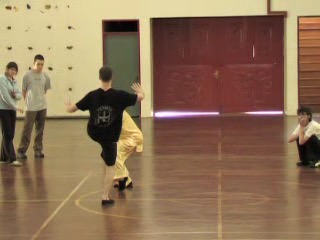 Grandmaster Wong attempts to push Sifu Jamie to fall over. Sifu Jamie retreats a small step to neutralize the push, and counters with a thrust kick. Grandmaster Wong brings his front leg to a T-Step to avoid the kick and simultaneously strikes the kicking leg with Single Whip.