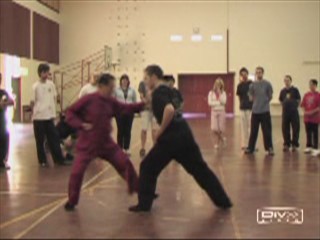 We in Shaolin Wahnam believe that kungfu can be used for fighting.

Those who are not connected with kungfu today will find this statement ridiculous. It is as ridiculous as saying that we believe food can be eaten or a swimmer can swim!

Some world known kungfu (including Taijiquan) masters even explicitly say that kungfu cannot be used for fighting! Many use Kick-Boxing, Karate or other martial arts in their sparring practice, though some of them still call it kungfu.

What they choose to use is of course their right and prerogative, but we in Shaolin Wahnam are dedicated to preserve the martial aspect of kungfu. We are able to use kungfu for sparring and fighting because we still have an effective sparring methodology and are willing to share it with those who are deserving and want to benefit from it.

One can use kungfu for fighting only if he has followed a sparring methodology using kungfu forms. If he only practices kungfu forms in solo, he will fight haphazardly.

An essential aspect of our sparring methodology is combat sequences. The video clips below show how participants at the Sabah Intensive Shaolin Kungfu Course of March 2007 applied the first four combat sequences in their sparring.

Having learnt one-step sparring or miscellaneous techniques, participants progress to sequence sparring. Instead of attacking with a pattern at a time, the attacker links various attack patterns into an attack sequence. Here the three attack pattern of “Black Tiger Steals Heart” are executed continuous as one smooth sequence, which is also called “Black Tiger Steals Heart”.

Continuing a Sequence with One more Attack 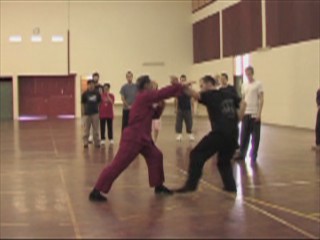 Sequence Performed as if One Smooth Pattern 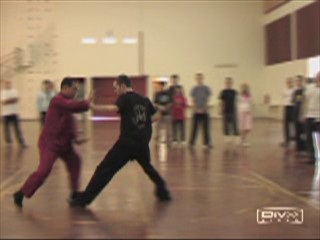 “Poisonous Snake Shoots Venom”, is employed in the attack. The whole sequence of three attack patterns and three defence patterns is performed smoothly as if they were one continuous pattern. 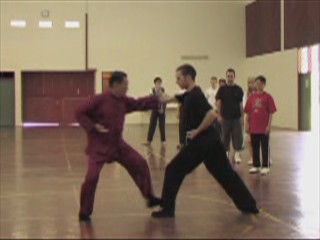 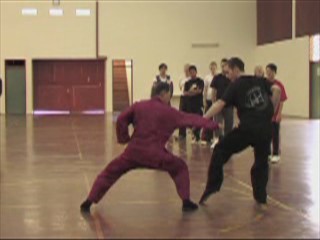 Variation from a Combat Sequence 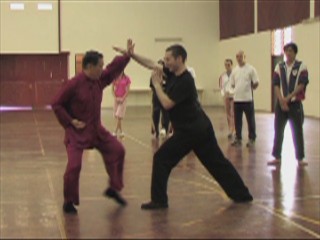 Here is a variation in Sequence 3. Before your opponent attacks you after he has swept at your low punch, you can circulate your hand around his sweep to avoid it and immediately swing a horn punch at his temple.

Retreating a Step when in Difficulty 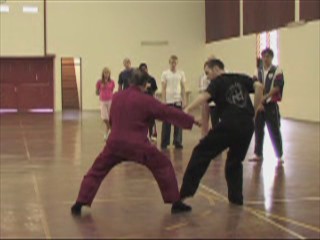 Here are some finer points of Combat Sequence 4, “Hang a Golden Star at a Corner”. It is important to cover the opponent's hand to prevent his counter-strike, but be careful to prevent the opponent from kicking at your groin. What could he do? He can merely move back a step. The same principle is applicable to daily life. If situations seem impossible, just move back a step.

The Importance of the Guard Hand 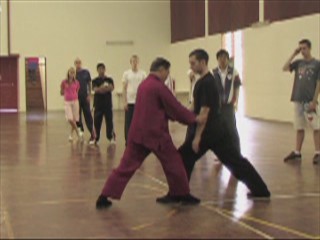 The guard hand is very importamnt when you make a close-range attack, as in “Hang a Golden Star”. Without the guard hand, it would be easy for an opponent to cause serious damage in a counter-attack. There are many possibilities you can use if he counter-attacks.

One Hand Against Two Hands 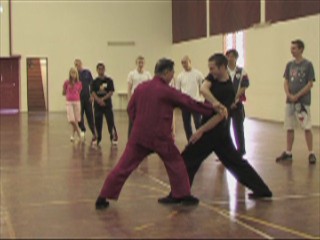 Here is the tactic of “one against two”, i.e. using one hand to tame two hands of an opponent. With the opponent so controlled, you may strike him easily -- if he does not know how to counter. 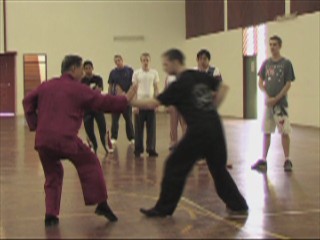 Combat Sequence 4 is performed slowly to show the teaching points mentioned. Take note of correct spacing and correct timing. It is very important to cover your opponent before attacking him so that you are safe from his surprised counter-attacks.