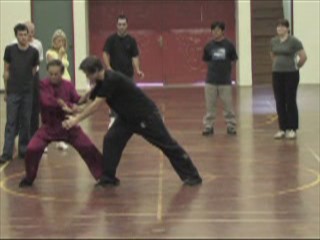 When you opponent thinks that he has broken your ribs, he finds your snake palm thrusting into his throat!

When Grandmaster Wong first founded the Shaolin Wahnam Association in Sungai Petani, Malaysia more than 20 years ago, two lines of a poetic couplet were written alongside our Shaolin Wahnam logo. These two lines, possibly introduced by the Venerable Harng Yein, the Second Patriarch after the Venerable Chee Seen in Uncle Righteousness lineage, are as follows:

The video clips below show an example of a marvelous technique.

The procedure is simple. When an opponent attacks you with a middle-level strike, which is a very common form of attack, you deflect it with a Single Tiger, tame his hand and leg, and strike him with a Dark Dragon.

When it becomes a marvelous technique executed with your wondrous skills, you break your opponent's ribs as soon as he attacks!

The counter again this marvelous technique is even more marvelous. When an opponent applies this technique on you, he may find your snake palm thrusting into his throat at a time when he thinks he has broken your ribs.

Find out more from the video clips and their accompanying explanations below. You will also find the secret of exploding internal force.

Breaking an Opponent's Ribs as Soon as he Attacks 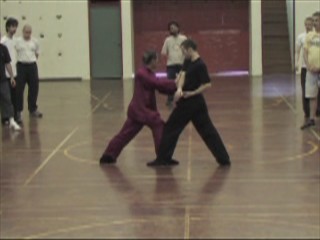 An effective counter against a middle punch is a palm strike at the opponent's ribs at the time when he has just completed his punch. If you practice this technique 50 times daily for six months, you may break the ribs of most attackers as soon as they attack you. The name of the pattern is called “Dark Dragon Draws Water”. As shown in the video, it appears the opponent has no way to escape.

Closing an Opponent with Little Change of Escape 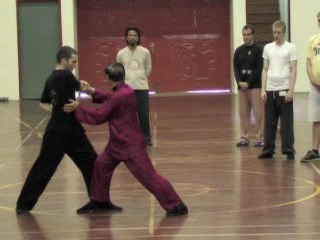 A common mistake some students make is to push the opponent away instead of closing him. Pushing him away will make it more difficult to strike him. As the strike is close-range, it is preferable to use internal force. 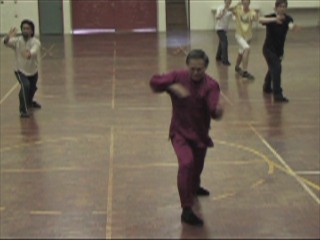 The stance must be firm. Rotate the waist and let internal force spiral out from the dan tian through the arm to the palm to be exploded out. Of course you must have internal force in your dan tian to start with.

As the opponent attacks, rotate your waist to deflect, not block, the attack, and simultaneously thrust a reverse palm strike to the opponent's throat. This is a beautiful counter against a beautiful attack, striking an opponent at a time precisely when he thinks he has made a hit. It manifest the Shaolin poetic saying that “Marvelous techniques beget marvelous techniques”. 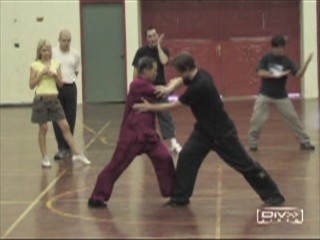 The marvelous technique is shown again. The onus is not to block, but just rotate the waist with the hands in the right position. The rotation of the waist will deflect the attack, without having to move the hands. The left hand is then thrust up at the opponent's throat. Remembering to adjust your foot position of your back leg. 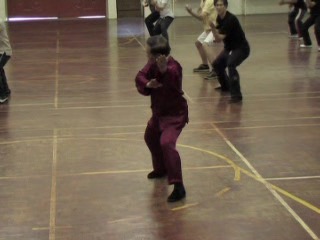 Grandmaster Wong leads the class in performing the marvelous technique. By itself, the technique is simple, and even looks prosaic. But its application is marvelous. It is an example of profundity in simplicity, which is characteristic of genuine Shaolin Kungfu.

Sail Along with the Attack 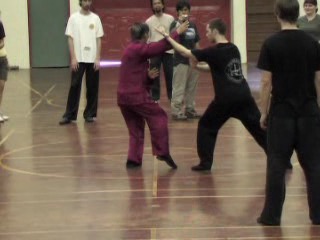 How would you defend against the marvelous counter? An example is shown here. As the opponent thrusts the reverse palm strike at your throat, sail along with it using his momentum, then thread it away and counter-attack with a Precious Duck. If the opponent counter-strikes with a hand sweep, gently move your arm away to avoid the strike. 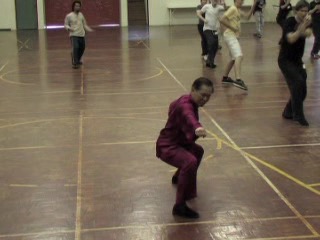 Notice that you float the opponent's thrusting attack following his momentum. It is not necessary to push it away vehemently. Threading the opponent's upward and counter-attacking him below, as shown here, is applying the tactic of “Sounding East attacking West”. 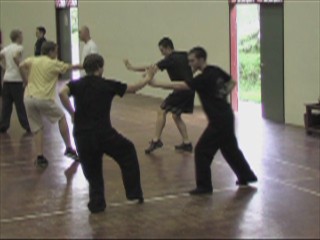 Participants practice the sequence just taught. Learning takes only 5% of the time, practicing requires 95%. The onus of mastery is practice, not learning. But one must practice correctly and smartly. Wrong practice brings harmful side-effects. Unintelligent practice wastes much time..