THE BASICS OF SHAOLIN KUNGFU 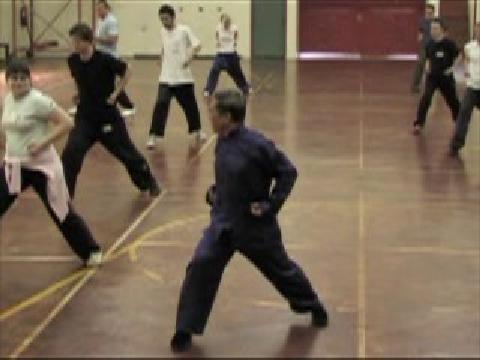 Grandmaster Wong demonstrating how to move effectively in stances

Many people say that the basics are very important in kungfu training, but not many know what actually these basics are. They mistakenly think that practicing the basics means practicing kungfu sets. Ironically, though they have this mis-conception, they often only practice kungfu sets throughout their kungfu career without practicing other aspects of kungfu.

In our school, solo set practice is not the basic. They are many things we need to train before solo set practice, and these include entering Zen, chi flow, stances and footwork, flexibility and kicks, fundamental patterns, spacing and timing, and exploding force.

Interestingly, some of what we regard as basics, like entering Zen, chi flow and exploding force, are considered advanced by many other kungfu schools and hence are learnt only at the advanced stage of their kungfu training. Some, like spacing and timing, are seldom taught in other kungfu schools.

To us, “basics means very important, forming the foundation upon which all future development depends. If your basics are not sound, not only your future development will be hampered, you may even derive harmful effects rather than benefits from your training. This, indeed, happens to many unwitting practitioners, and unfortunately they normally are unaware of it. Thus, many practitioners develop knee injuries and energy blockages due to their faulty footwork and habitually tensing their muscles in their training. 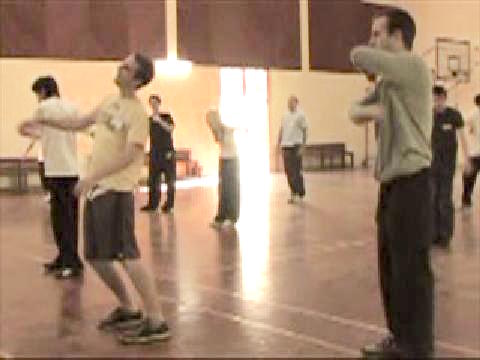 In many ways this is the most important lesson in our kungfu training. Hence, it is always taught right at the beginning. Because our students are able to enter Zen and generate an internal chi flow, all our kungfu practice is a training of mind and energy. Amongst other benefits, our kungfu training gives us mental clarity and good health. 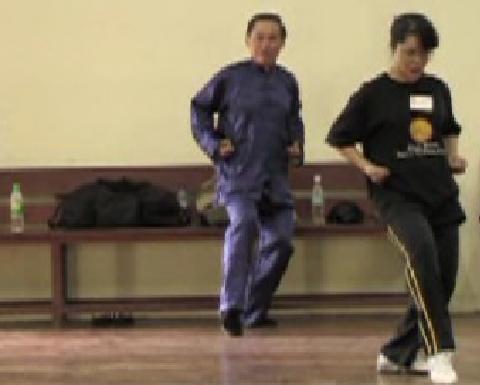 The single most important category of exercises to develop internal force is stance training. However, many students perform it incorrectly. Not only they do not derive benefits, they may have adverse side-effects. One common adverse side-effect is knee injury, which may be caused by performing the False Leg Stance wrongly. If you listen to your body, if a stance is performed wrongly, you could feel energy blockage somewhere in your body. If you perform False Leg Stance wrongly, it is likely that you will feel blockage at your ankles, knees and hips 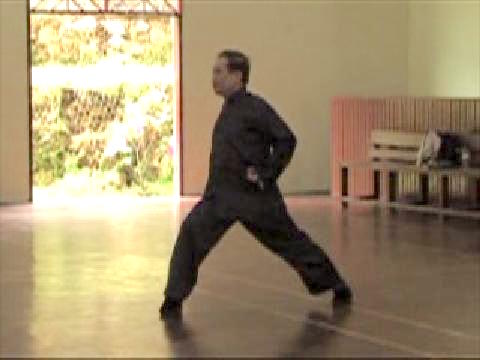 The way we perform the Bow-Arrow Stance is quite different from that performed in many other schools. In our school, the front foot and the back foot are in line, whereas in others they are slightly apart. Both our feet point inward at about 45 degrees, whereIn other schools the front foot points ahead and the back foot points sideways. It is also important not to bend your front knee beyond your font toes, otherwise you may injure your knee. 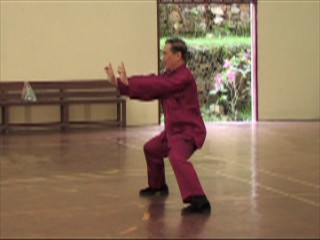 Three-Circle Stance and Golden Bridge are the most popularly used stance for developing internal force in Taijiquan and Shaolin Kungfu respectively. Stance training is simple, but not easy. There are only two steps — ensure that the position is correct, and follow the three golden rules of relax, relax and relax. Stance training should never be an endurance test. 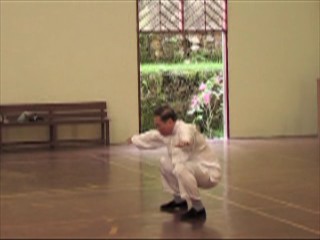 Besides stance training, you should also train the art of flexibility, which consists of five exercises, namely “Three Levels to the Ground”, “Dancing Crane”, Touching Toes”, “Dragon Fly Plays with Water” and “Immortal Takes off Shoes”.. They are chi kung exercises and not merely leg stretching, which is only one of the many benefits.

Moving about effectively in stances

The term “mabo” is often heard in kungfu. Some people think that it refers to the Horse-Riding Stance. This is only part of its meaning. Some think that it refers to stances. This is only half the meaning. “Mabo” is a compound word composed of two terms, “ma” which means “stances”, and “bo” which means footwork. Here Grandmaster Wong teaches some basic “mabo” movements. 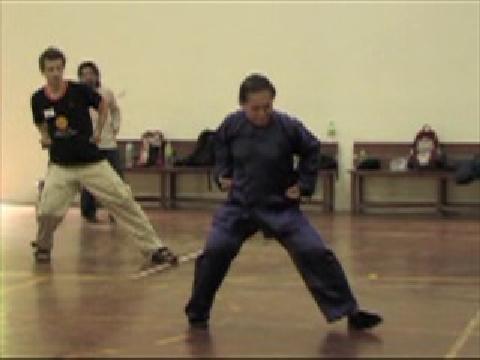 Movement from the Waist 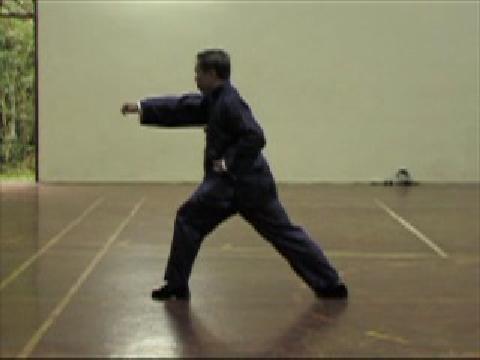 “Movement from the Waist” is a kungfu expression often heard but seldom understood. The waist movement harmonies with the leg movement and the hand movement, constituting the three external harmonies. These three harmonies are important in fa-jing, or explode force, and is manifested in the principle of “starting from the back leg, rotating the waist, and completing at the hand”, as shown here by Grandmaster Wong in exploding force using the pattern “Black Tiger Steals Heart” and “Poisonous Snake Shoots Venom”. 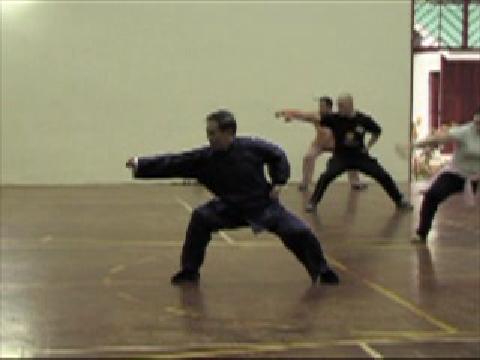 An important tenet in “fa-jing” or “explode force” is “keng yow tan tien fatt” (Cantonese pronunciation), which means “internal force is exploded from the dan tian”. To facilitate this, apply the principle of “start from the back foot, rotate from the waist, and complete at the hand”. Here Grandmaster Wong leads the class in “fa-jing” using the pattern “Precious Duck Swims through Lotus”.

Force and Flow in Every Move 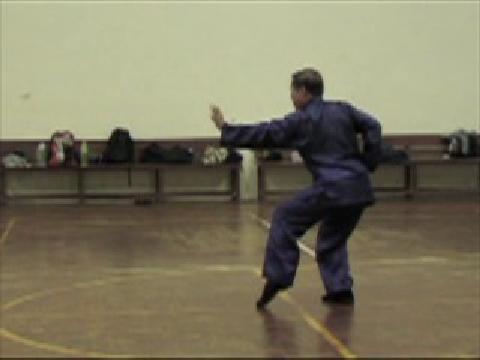 Once you have acquired the skill of “fa-jing” or explode force, which uses flowing energy and not muscular strength, you can perform any pattern flowingly and forcefully. This means you can be forceful, fast yet not panting. This skill, of course, can be transferred to our daily life. In other words, you can work hard physically or mentally for a long time and not become tired! Here, Grandmaster Wong demonstrates exploding force in other patterns. 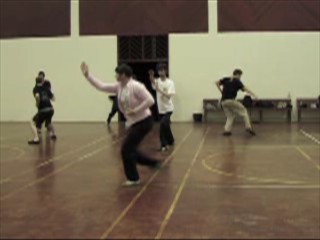 When you can perform individual patterns well, i.e. with correctness of form, reasonable force and fluidity of movement, you can link them into a sequence. This video clip shows course participants linking the patterns they have just learnt into a sequence. The numerous patterns in a sequence should be performed smoothly as if they were one long continuous pattern. 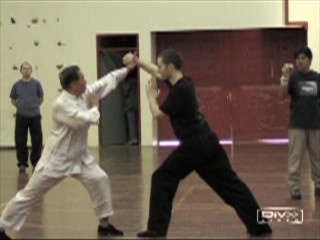 When you can perform patterns with correctness of form, reasonable force and fluidity of movement, you can apply them in combat. Combat application must be learnt and practiced systematically. First, you practice using miscellaneous techniques in one-step sparring. Initially the sparring is pre-arranged with full control. Gradually and systematically the control is released, as is shown here where the responder does not know beforehand which side the initiator will attack. He learns to respond correctly and spontaneously. 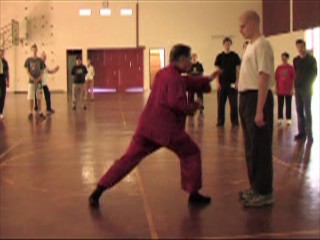 Footwork and spacing are two important aspects in combat. They should be systematically trained, not just left to be acquired haphazardly. Here Grandmaster Wong teaches the class to assess by how many spaces an opponent is away, and how to move in swiftly and safely with appropriate footwork. 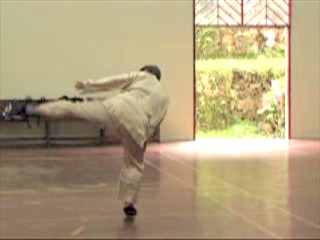 Kicks are important in combat, and there are a wide range of kicks in Shaolin Kungfu. Here Grandmaster Wong demonstrates a side-kick using a pattern called “Happy Bird Hops up Branch”. Balance is essential in executing kicks successfully as well as in defending against an opponent's counters against your kicks. Grandmaster Wong advises that the chest should be relaxed and the mouth open when exploding force in a kick. 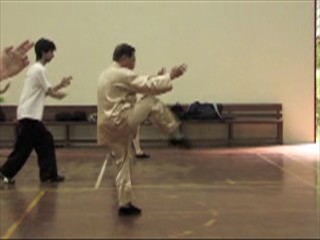 In this video clip Grandmaster Wong demonstrates two of the basic Shaolin kicking techniques, namely organ-seeking kick and whirlwind kick, using the patterns “Yellow Bird Drinks Water” and “Naughty Monkey Kicks at Tree” respectively. These two kicks are deadly — they can maim or kill in just one move.

We wish to thank Mr Godfery Kissey of Ogingo Videography, Penampang, Sabah, Malaysia for kindly provideing us with the videos. (Godfery is also a member of our Shaolin Wahnam Family.) His telephone number is 60-88-731788, and e-mail address is godfery@pc.jaring.my.