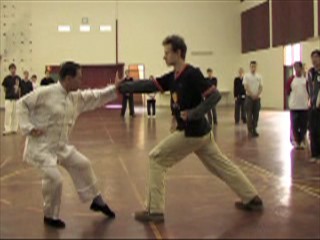 It is a mis-conception amongst many students that one will win a fight if he has the right techniques. Actually, more important than techniques are the skills in executing the techniques effectively.

Kungfu is well known for its great variety of techniques. But kungfu practitioners cannot fight effectively because they lack the skills to do so even when they know the techniques.

Amongst the most important combat skills are right spacing and right timing. Surprisingly, such skills are normally not trained in typical martial art schools today. Students are expected to pick up these skills on their own from free sparring.

In our school, right spacing and right timing are amongst the earliest skills we train, for without these fundamental skills our techniques become ineffective even if they are appropriate for the combat situations.

It is also important for us to bear in mind that in training we work with our partners, not opponents. Hence, we help one another for mutual progress. Surprising it may be to other people, seniors normally derive more benefit when learning together with juniors. More significantly, the skills we acquire in our combat application, can and should be applied rewardingly in our daily living.

Grandmaster Wong highlights that in responding to an opponent's attack, not only the form must be correct, the spacing and the timing must be right. In fact, right spacing and right timing are more important than the defence technique itself.

Helping One Another in Sparring Practice 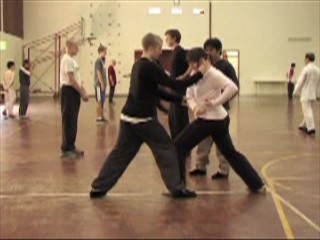 In our school, sparring is not out-doing each other, but an opportunity to help one another. Here Nick indicates to Nicky that her spacing is incorrect, while Nicky in return helps Nick to correct his posture so as not to give away disadvantages.

It's a Lean, not a Block 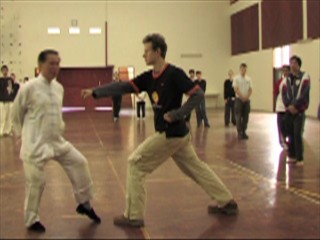 Grandmaster Wong reminds the participants not to make the common mistake of using “Single Tiger Emerges from Cave” as a block. It is a leaning technique, not a block. Even if you do not make any hand movement, an opponent could not hit you as you have moved away from his attack by retreating from a Bow-Arrow Stance to a False-Leg Stance.

Being Too Slow or Too Fast is Incorrect 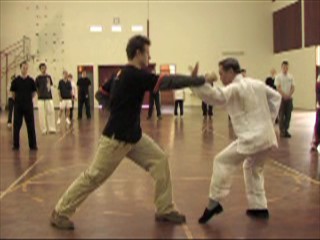 Your response should not be too slow or too fast. With systematic practice, right timing can be attained, and of course it should be coordinated with right spacing. 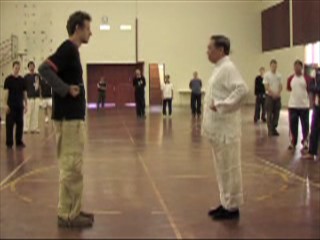 Grandmaster Wong demonstrates some common mistakes many students make. One common mistake is the disharmony of “jing”, which may be conveniently described as being clumsy. This results in poor forms which give away disadvantages to opponents. Another mistake is bad timing and bad spacing even when the technique is correct. This may, as in the example here, result in the responder's wrist being hit by an opponent. 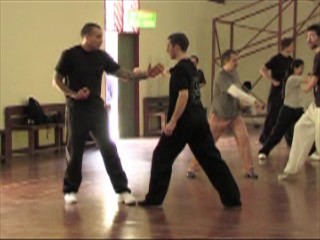 An important teaching in our school is always to regard the person we train with in sparring as our partner, and not our opponent. Hence, we work together for mutual benefit, with the seniors helping the juniors. Here, Sifu Jamie Robson of Shaolin Wahnam Scotland gives some useful tips to Mark of Shaolin Wahnam England.

Striking, not Blocking, an Opponent's Arm 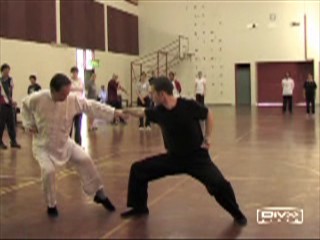 Grandmaster Wong explains that in “False-Leg Hand Sweep”, we strike an opponent's arm, not merely block his attack, a common mistake made by some students. This is an example of “no defence direct counter”, a tactic used to strike an opponent at a time when he just completes his attack.

The Onus of Kungfu is Practice 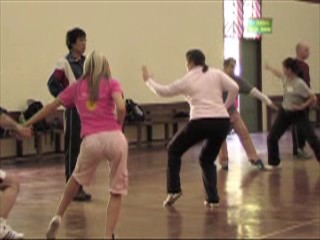 It is useful to remember the difference between learning and practicing. We may learn a technique in 5 minutes, but need 5 weeks to practice it well. The onus in kungfu training is not learning but practice. Here participants practice what they have just leant with the help of instructors.

Break your Opponent's Arm, not your Own Arm 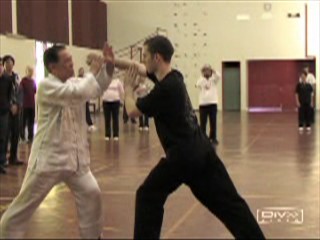 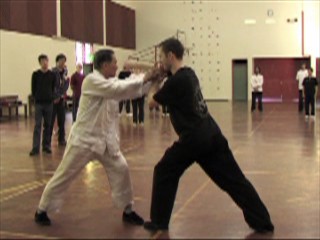 Another common mistake many students make in executing “Immortal Emerges from Cave” is moving the hand out at a wrong angle. It should be about 45 degrees, not 20 degrees or 70 degrees. Wrong angling may result in your opponent striking your temple, even when your technique is correct. But right angling may break the opponent's forearm or dislocate his elbow.

Make Sure You Don't' Make this Fatal Mistake 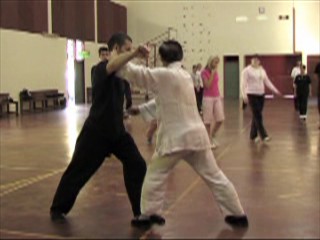 It is of utmost importance to have your guard-hand ready when executing a close attack like “Hang a Golden Star at a Corner”. Grandmaster Wong asks the participants to come closer to see what would result of the guard-hand is absent. Only when you are advanced, you may leave the guard open to trap an opponent.

Tricking an Opponent to Attack 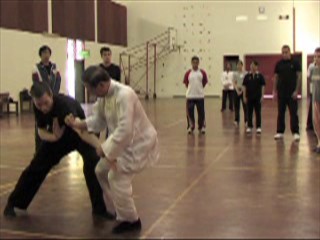 If you are skillful you may leave an opening on purpose to trick your opponent to attack so that you can follow up with a surprised counter. Here Grandmaster Wong purposely leaves his guard open when executing “Immortal Emerges from Cave” to trick his opponent. When the opponent falls into the trap, Grandmaster Wong dislocate his elbow. Grandmaster Wong reminds the participants that they must guard their groin with an appropriate False-Leg Stance while executing the counter.