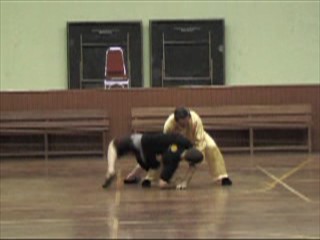 To kill or to be merciful. The choice is yours in Planting Willows in Front of Tent.

Muay-Thai fighters are amongst the most feared opponents of many martial artists. They are both fast and powerful, and their attacks are tricky. One of the most deadly attacks is an upward knee strike to an opponent's chest or head while pulling the opponent down. Many martial artists do not know how to defend against this attack.

But we are lucky. Our patriarch, Grandmaster Ho Fatt Nam, was a professional Muay-Thai champion before he gave up Muay-Thai for Shaolin Kungfu. He passed to Grandmaster Wong many secrets in fighting against Muay-Thai opponents. One of these secrets is a beautiful counter against the deadly Muay-Thai knee attack employing the Shaolin pattern “Planting Willow in Front of Tent”.

As part of an on-going effort to preserve genuine, traditional Shaolin Kungfu, Grandmaster Wong shares this secret of Grandmaster Ho Fatt Nam on Planting Willow in this video series, after he has shared the secret of Uncle Righteousness on Continuous Cannons in another video series.

“Planting Willow in Front of Tent” or “Yeng Chin Chap Lou” in Chinese (Cantonese) also incorporates many beautiful Shaolin principles like “Flowing With an Opponent's Momentum”, “Using Minimum Force against Maximum Strength”, and “To Kill or To Be Merciful” — principles that are often heard but seldom understood. 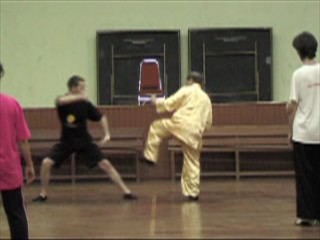 Grandmaster Wong demonstrates in slow motion a series of formidable Muay-Thai attacks. They usually come in a series of three. The first two leg attacks could be feint or real, but the coup-de-grace is the knee strike.

How would You Counter these Deadly Attacks? 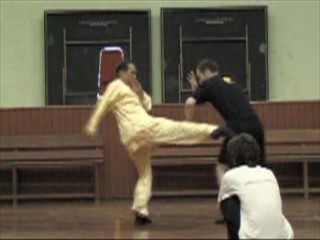 Grandmaster Wong repeats the series of Muay-Thai attacks from a different angle. He adds two more attacks — another knee jab and a downward elbow strike. How would you counter these deadly Muay-Thai attacks?

Planting Willow in Front of Tent

Grandmaster Wong strikes the first kick, irrespective of whether it is real or feint. He slants his body backward to avoid the second kick. Then he “floats” the attacking knee and throw the opponent overhead onto the ground. This pattern is called “Planting Willow in Front of Tent”, and is a legacy from his teacher, Grandmaster Ho Fatt Nam. 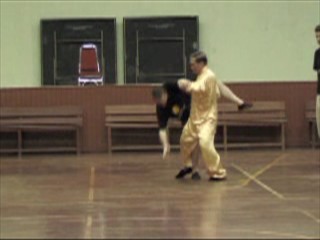 The attack and counter are now performed smoothly. Here Grandmaster Wong places his foot forward to trip the opponent, breaks his wrist by stepping on it and finishes off him the with a chop on his head. Notice that the counter movements follow the opponent's momentum instead of going against it. 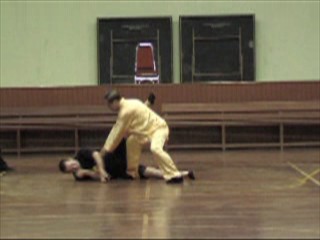 Here Grandmaster Wong shows the details of the counter movements. While you float the opponent's attacking leg, you also need to brush away his two hands or else he may attack your face. The uninitiated, including many kungfu practitioners who only perform external forms, would wonder what can this pattern be used for. This is an example of the profundity of Shaolin Kungfu. 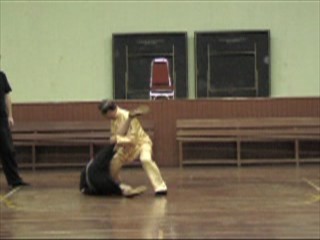 The pattern is repeated to show its smooth flow. When it is performed smoothly, it needs little muscular strength to fell an opponent. Good timing and spacing are important. Here Grandmaster Wong uses his knee to fell his opponent. One must, in this situation, be careful of a possible counter-strike to the groin by the opponent.

A Beautiful Counter against a Deadly Knee Strike 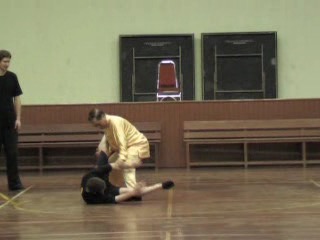 This is a beautiful counter against the deadly knee strike of a Muay-Thai fighter. But you must be careful to cover the opponent well so that he could not counter-strike you at close quarters, like gripping or kicking at your groin.

Controlling an Opponent Without Hurting Him 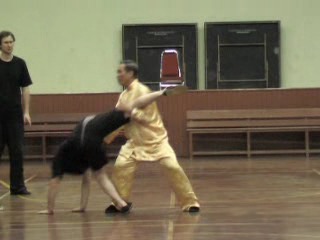 Why is the pattern called “Planting Willow in Front of Tent”? It is meant to smash the opponent's head onto the ground as if planting a tree. But we let mercy flow from our hands, and let the opponent gently on the ground. Sifu Jamie, who acts as the opponent, is obviously enjoying himself.

Let Mercy Flow From Your Hands 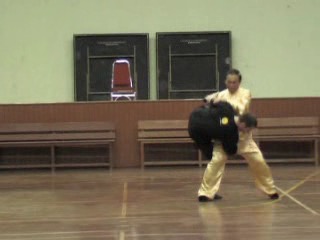 A skillful Muay-Thai fighter would place his opponent in an apparently hopeless situation before striking the opponent's chest or head with his knee. Yet a skillful Shaolin practitioner could neutralize this attack almost effortlessly, and control the opponent without hurting him unnecessarily, though he could have killed or maimed the opponent if he wanted to.