POETRY AND ELEGANCE IN EFFECTIVE COMBAT 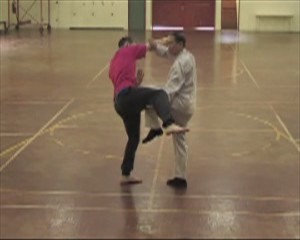 Taijiquan patterns are as elegant as they are deadly

Taijiquan is often regarded as a scholar's martial art. It is gentle and graceful, and its patterns are poetically named, like “White Crane Flaps Wings”, “Jade Girl Threads Shuttle” and “Push Open Window to Look at Moon”. But it is highly combat efficient.

A Taijiquan exponent needs not be rough and tough, yet he can be powerful and deadly if he wants to, but he usually spares his opponent from injury. The secret of accomplishing this yin-yang harmony of being gentle yet powerful, being elegant yet combat efficient, lies in the cultivation of chi and the application of internal force.

Breaking Ankle as Kick is Spent 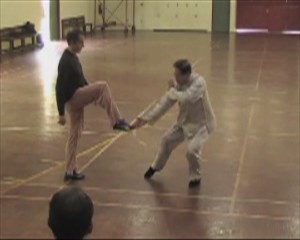 What can “Needle at Sea Bottom” be used for? One effective application is to counter the deadly organ-seeking kick. You dislocate the opponent's ankle or break his leg as his kick is spent. 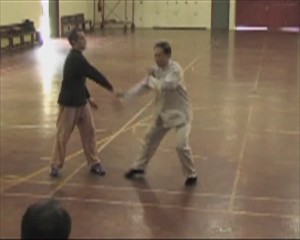 Another application of “Needle at Sea Bottom” is to release a grip on your arm when the grip is just applied on you. If the grip has been established, you can release it with a small circular movement of your hand before you bring it sharply down.

Felling an Opponent who Grasps You 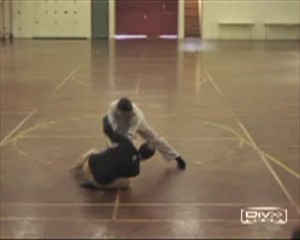 A participant asks how a certain Taijiquan movement can be used for combat. This movement is not found in most styles of Taijiquan, and is similar to “Black Tiger Guards Door” in Shaolin Kungfu. It can be used to fell an opponent who tries to grasp you. 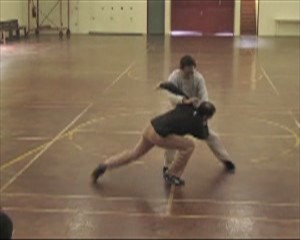 The movement to fell an opponent is shown in slow motion so that participants can see the fine points involved. Rotating the waist to follow the momentum of the opponent is important. 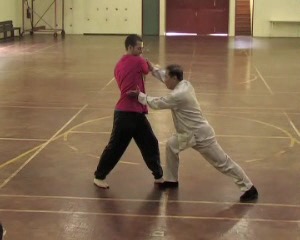 Floating and Not Blocking 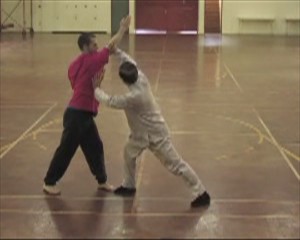 Here is a common mistake students make when applying “Jade Girl Threads Shuttle”. It is not a block but a floating technique. When an opponent chops down on you, if you block the chop, your arm may be fractured. You should float it, preferably at his elbow, and simultaneously strike him with the other palm. 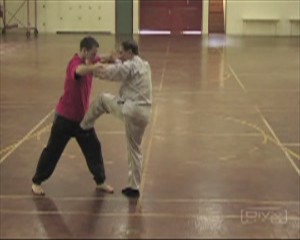 “White Crane Flaps Wings” is as elegant as it is deadly. If an opponent grips your two hands, you can release the double grips and kick at his groin at the same time. If he attacks you with a strike, you deflect the strike with one hand, strike him with the other hand, and kick him below.

White Crane All the Way 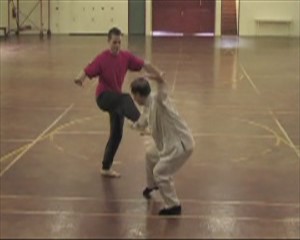 White Crane is Not Just for Show

The Completeness of Grasping Sparrow's Tail 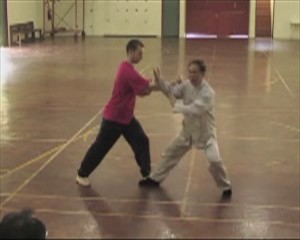 Releasing Double Holds on Both Hands 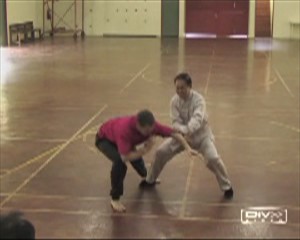 When an opponent holds both your hands, you can release the hold with the “lu” or “roll back” technique, follow with a strike using “li” or “press forward”. These two parts of “Grasping Sparrow's Tail” are known in Wahnam Taijiquan as “Double Dragons Play with Pearl” and “Push Boat According to Flow”.

Reducing Two Movements to One 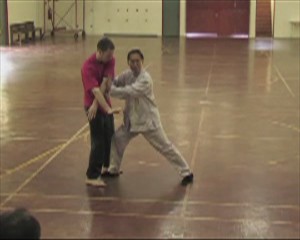 The two movements in the previous video clip can be reduced to one to release your both hands from being held, followed by an arm strike to your opponent while covering his hands to prevent him from counter-attacking. This is the “li” or “press forward” technique, and the pattern is known as “Push Boat According to Flow”. 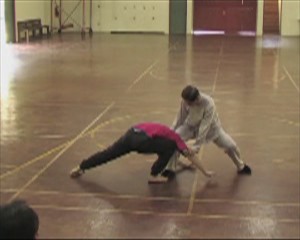 When an opponent holds your waist or legs as in the shoot, you can fell him using the “cheng” or “sink” technique. In our school this pattern is called “Black Bear Sinks Hips”. 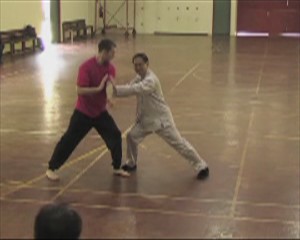 The “an” technique, which actually means “place on” in the sense of being in contact although it is often referred to as “push”, is useful for “closing” or “taming” an opponent, making it difficult for him to attack. In our school this pattern is called “Push Open Window to Look at Moon”.