POETIC PATTERNS CAN BE VERY DEADLY 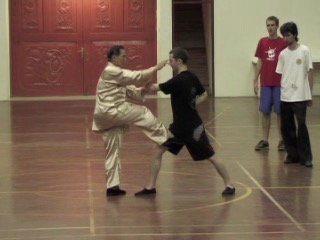 A Deadly Attack with a Poetic Name

All kungfu patterns are named, often poetically and always meaningfully. “Black Tiger Steals Heart”, for example, indicates a strike to the heart or solar plexus (not to the jaws), and “Golden Leopard Speeds through Jungle” indicates a fast strike penetrating intervening defence. Some patterns, especially in recent times, are technically named. For example, “Black Tiger Steals Heart”, is also called “Bow-Arrow Thrust Punch”.

Poetic patterns can be very deadly. One may think that “Yellow Oriole Plays with Water” is delicate and elegant, which it is, but it is also a deadly double attack at the eye and groin at the same time.

This video series shows how you may intercept pressing attacks with “Yellow Oriole Plays with Water”, or, interestingly, continue your pressing attacks with this deadly pattern. The attacks and counters here constitute Combat Sequence 11, which is also named after the poetic pattern. An important tenet, “Moving Back One Step” is also explained.

When in Difficulty, Move a Step Back 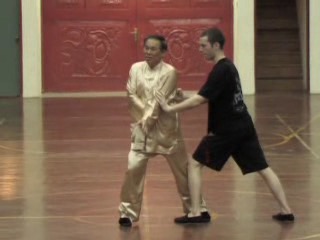 You plan a pressing attack but your opponent intercepts and “tames” your hands. What could you do? He seems helpless. As in life, when situations appear helpless, move back one step and often you will be able to find a solution. Here, not only you have found a solution but threaten your opponent with a double attack, one to the eye and the other to the groin.

You intend to implement some pressing attacks but your opponent intercepts and counter-attacks. You responds with a deadly double attack using the poetically named pattern, “Yellow Oriole Plays Water”. 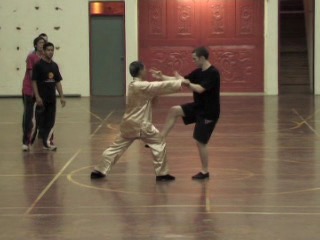 The roll is now reversed. Your opponent threatens you with two deadly attacks in one technique using the pattern poetically named “Yellow Oriole Plays with Water”. If you block the top attack, you would be kicked at the groin. If you block the kick, he would suffer an eye attack. What can you do? Simple, if you know how. 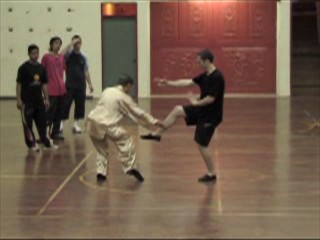 When you are faced with a seemingly helpless situation, move back one step -- in kung and in life. Not only you can avoid the deadly double attacks, you also strike the attacking leg, using the tactic of “no-defence-direct-counter”. Your opponent pulls back his kicking leg to avoid the counter-attack, then moves in to “close” your hands, simultaneously striking your neck with a leopard punch. Again, you move back and thread away the attack with “Golden Dragon Plays with Water”. 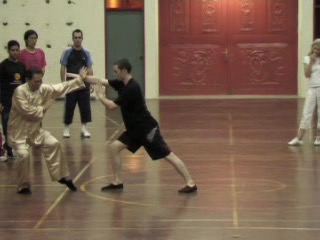 The various attacks and defences form a combat sequence, which is called “Yellow Oriole Plays with Water”. It incorporates the deadly organ-seeking kick. 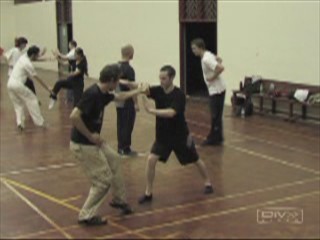 Practice is essential in kungfu; it constitutes 95% of the time, learning is only 5%. Anyone who is not willing to practice diligently will not be proficient in kungfu no matter how much he learns. Helping one another and enjoying the practice are two hallmarks in our school. Injuries almost never happen.