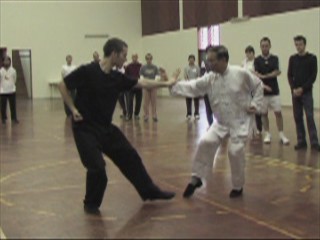 In today's free sparring, many martial artists do not realize that they have given away many disadvantages of themselves to their opponents, without their opponents having to do anything. This is what we call “free-offers”. Some examples are rushing in to attack exposing their body openly, or kicking high and exposing their groin.

In our combat training, the first principle is to ensure that we are safe. It doesn't mater if we lose a fight but come out unhurt. Some martial arts have a different philosophy. They advocate win at all cost, even sustaining serious injury. Such martial arts pay little attention to safety first. Some are meant to be sports, and as the practitioners are protected by safety rules they often neglect to ensure their own safety first in combat.

To ensure safety, we do not give away disadvantages to our opponents. Not covering the opponent's guard-hand before attacking, and adopting footwork that exposes your groin are obvious examples of free-offers. Less obvious examples are attacking while your chi is floating, and making movements without focus.

Then we should be able to recognize free-offers our opponent may give us and exploit them. But we need to be careful that they are free-offers carelessly made by our opponents and not feint moves or tactics to trick us.

If your opponents are well trained, they will not give away free-offers. In this case we have to create our own advantages. This can be realized by employing tactics and strategies.

The video clips show how you can avoid disadvantages and seek advantages as learnt and practiced at the Sabah Intensive Shaolin Kungfu Course in March 2007.

Be elegant, focused at the dan tian and mentally calm and fresh 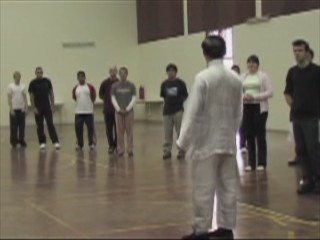 Correct Spacing in Responding to an Attack 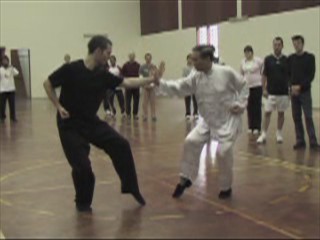 When responding, ensure that your spacing is correct. If you move too far away, you may avoid an opponent's attack but miss a good opportunity of counter-attacking. If you are too close, you may not be effective in neutralizing his force, and worse, you may be hit.

The Three Points of Response

Beside spacing, timing must be correct. Of course if you respond too slowly, you would be hit. But responding too fast is also incorrect. The timing may be at the initial stage of the attack, when the attack is in he middle of its progress, or when the attack is about to be completed. If you are at the beginning stage of our combat training, you need not worry about these details. Begin your response when the attack has started, not before.

Weakness of Responding Too Quickly 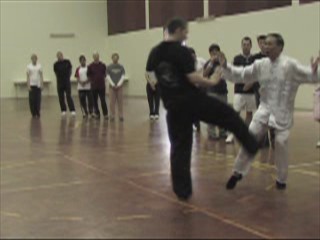 Many martial artists respond too quickly to an attack. As soon as an attacker makes a movement, they instinctively bounce away. If the attacker is skillful and trained, this can be a weakness. The attacker may abandon his initial attack, move in swiftly and attack deeply following the momentum of the retreating responder. Moreover, responding too quickly negates the effectiveness of counter-attacking if the attacker offers this opportunity. Thirdly, it negates the training of shen, or mind. 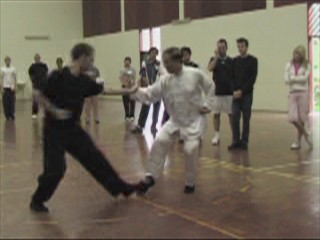 A common mistake amongst beginners is to use “Single Tiger Emerges from Cave” to block an opponent's attack. This pattern is not a block, but a leaning technique. You “lean”, not block, your Tiger-Claw on the opponent's forearm. When you block, you use force against force; but when you lean you need only minimum force. This is a useful tactic to avoid an opponent's powerful attack and prevent him from further attacks. 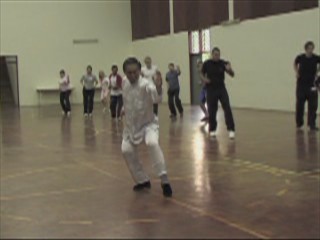 Helping One Another in Combat Training 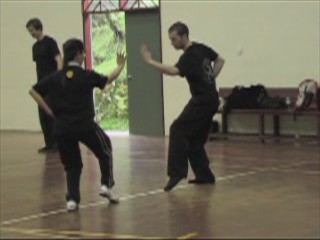 Remember that in combat training, the one in front of you is not your deadly enemy but your sparring partner. You should, therefore, help each other. 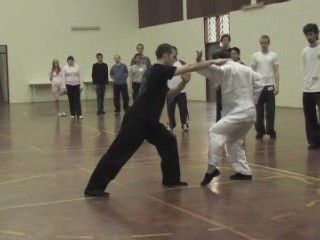 An Example of a Free-Offer 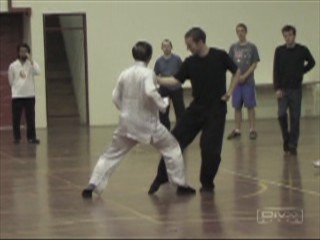 This video clip shows a common mistake made by many students, i.e. moving into an opponent's guard hand. It is a free-offer. The opponent would just strike you as you move in. 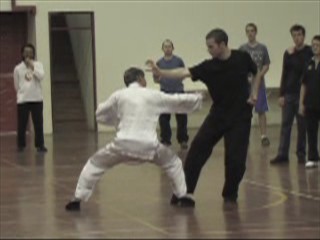 Here are more examples of free-offers. When moving in to execute a low stance arrow punch as in the pattern “Precious Duck Swims Through Lotus”, students often move in too close, thus moving into an opponent's strike. They also fail to cover the opponent's guard-hand, thus exposing themselves to counter-attacks.