USING STRATEGIES AND TACTICS IN ATTACK AND DEFENCE 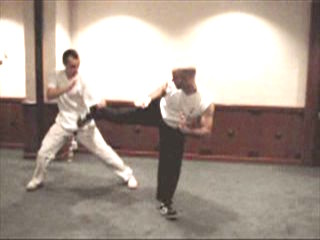 Many people fight randomly, often without techniques. If you use appropriate techniques in your sparring and fighting, you have a big advantage over your opponents who don't.

We move higher in the combat level. We move to strategies and tactics. The two terms often overlap, but generally strategies refer to holistic planning whereas tactics refer to exploiting local advantages.

If you use pre-planned combat sequences in appropriate combinations in your attack and defence, you use strategies. You unfold on your opponents a series of continuous attacks thought out beforehand to achieve the best advantages.

If in individual combat situations you maneuver your opponents into unfavorable conditions, you use tactics. For example, you give a feint opening, and as he moves in you kick him. Have fun working out the strategies and tactics found in these video clips.
Please click the pictures below to view the videos

Moving from One Sequence to Another 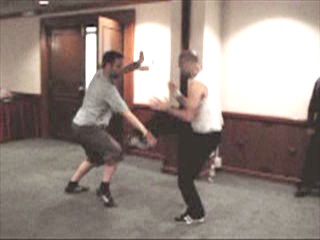 Planning an Attack with Appropriate Sequences 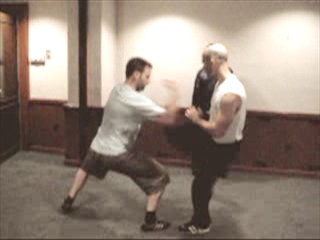 Sifu Anthony and Sifu Mastel review Combat Sequence 12, which carries a whirlwind kick. This sequence is a progression from Combat Sequences 9 to 11. You plan a pressing attack with continuous cannons. Depending on whether your opponent knows how to intercept or at what point he intercepts, your change your attack sequence accordingly. If he counter-attacks immediately with a chop, you respond with Combat Sequence 12.

Attacking with Planned Sequences and Modifications 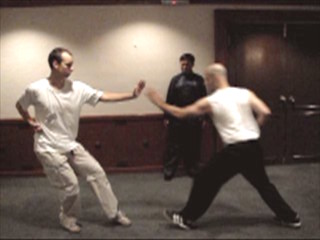 Sifu Anthony and Eugene go over with they did slowly to examine strong points and weaknesses. Sifu Anthony initiates with pressing attacks, and as Eugene counter-attacks after the second move, he proceeds to Combat Sequence 9. He is about to continue to Sequence 10 when Grandmaster Wong interrupts to show Eugene a more effective way to respond with the same pattern to Sifu Anthony's attack.

Attacking with a Pre-Planned Strategy 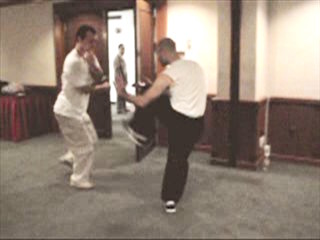 Sifu Anthony and Eugene repeat the movements they did earlier. Eugene learns fast. He makes the improvement pointed out by Grandmaster Wong. Can you recognize the strategy Sifu Anthony uses in this attack? In other words, what combat sequences he uses? And what changes he has to make if Eugene does not respond according to his plan?

Opening an Opponent to Continue Attacking 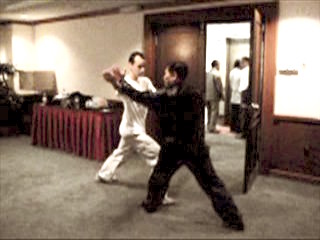 Sifu Anthony has used two sequences in continuation in his pressing attacks. He is about to continue with a third sequence. He closes Eugene's defence and proceed to another attack, starting his third attack sequence. At this point Grandmaster Wong interrupts to show Sifu Anthony another way to continue, opening the opponent instead of closing him, which makes the continued attack smoother and faster.

Attacking with Four Sequences in Continuation 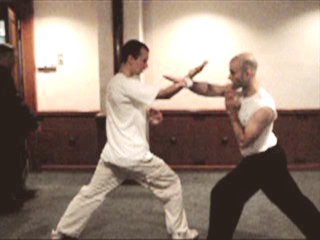 This is continued from the previous video clip. Sifu Anthony has attacked using Sequences 9 and 10 in continuation. Now he proceeds to Sequence 11 and proceeds to Sequence 12. In other words, Sifu Anthony uses Sequences 9 to 12 in continuation. Eugene is able to defend against this formidable pressing attack because he is familiar with the responses. Another lesser trained opponent would have been defeated much earlier. 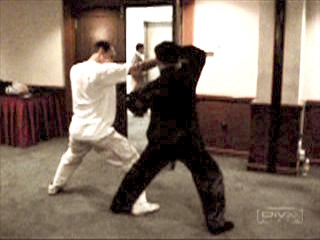 Intercepting and not Blocking 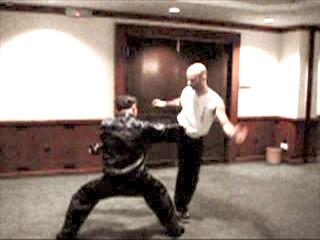 There is also a better way to execute “Bar the Big Boss”. Instead of blocking the whirlwind kick by meeting the kick head-on with the elbow, you can intercept the kick by moving the elbow downward. Not only this will minimize the opponent's force but also strike at some vital points of the opponent's kicking leg.

Using Exposed Area as a Trap 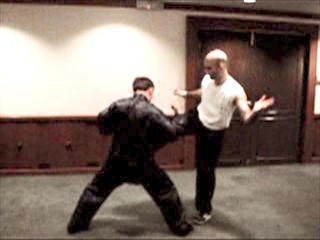 Here is the vertical interception using “Bar the Big Boss”. Good timing and good spacing are necessary. You need to realize that in this position the head is exposed., and you may use it as a trap for your opponent to attack. If he falls into the trap, how would you defeat him? Of course you must be skillful to risk this trick. 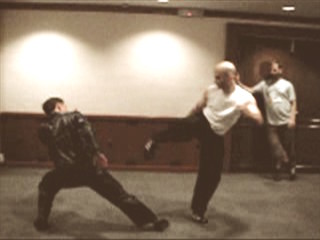 If your opponent is very powerful, you should use a “soft” counter against his whirlwind kick. Without moving your feet, sink your body slantingly backward to let the kicking leg pass. This pattern is called “Taming Tiger with String of Beads”. Do not block the kick with the right hand. It is meant to protect your own leg from being stepped on by the opponent's leg. Immediately, shift your body forward and strike the opponent with a leopard punch. 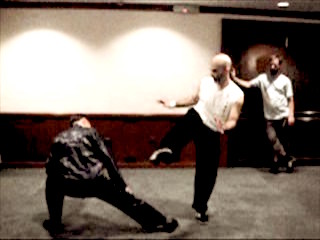 The two counters, “Bar the Big Boss” and “Taming Tiger with String of Beads”, are repeated. They are relatively “hard” and “soft”. What pro and con can you find in these two counters against the whirlwind kick. Would you be able to reverse the disadvantages to become advantages?

Brushing or Taming before Striking 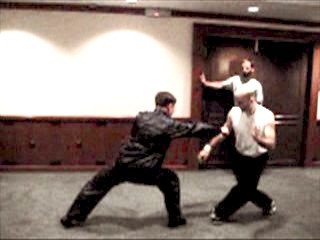 If you are too close or the opponent's leg is long, you would have to move your back foot a small step backward in the pattern “Taming Tiger with String of Beads”. If the opponent's leg has not been withdrawn, brush it aside before shifting forward to strike him. If he has withdrawn his leg, you have to “tame” it before striking.

Using Strategies and Tactics in Attack and Defence from Wong Kiew Kit on Vimeo.