THE AMAZEMENT AND EFFECTIVENESS OF MONKEY KICKS 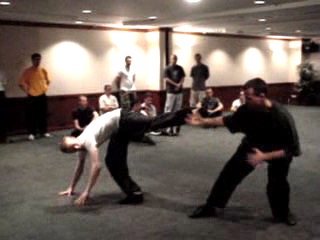 A Monkey may kick you before you relaize what has happened

Monkey Kungfu is well known for kicks. But the kicks in Monkey Kungfu are very different from those in Taekwondo.

A Monkey stylist uses his hand techniques to pave the way for his kicks. Often his hand movements camouflage his kicking techniques. Monkey kicks are effective and amazing. This video clips show some examples.

Strong Points and Weaknesses of Kicks 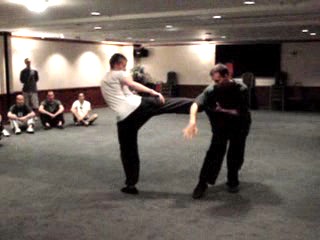 Nick of Shaolin Wahnam England and Charles of Shaolin Wahnam Canada work out a combat sequence of the Monkey Set. Monkey Style Kungfu is well known for tricky moves and kicks. What strong points and weaknesses you can find in the kicks shown in this video clip? 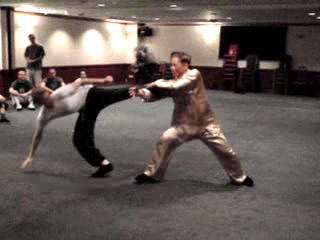 Nick gives a feint attack to Charles' face, and executes a whirlwind kick which catches Charles in surprise. Grandmaster Wong shows how you may change defeat into victory. He shifts his body backward to brush away the kick and then plucks some peaches. Nick, the young Monkey, gives a good response with a Monkey-Tail Kick, but the old Monkey, being both craftier and more knowledgeable, is ready for him. 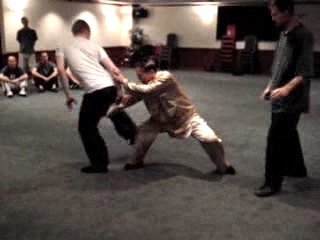 Even when you are close to an opponent, by using good footwork and body-movement you can brush away his whirlwind kick. Then you can reach for the peaches. As shown in the video clip, when the old Monkey is around, the young Monkey has no chance. 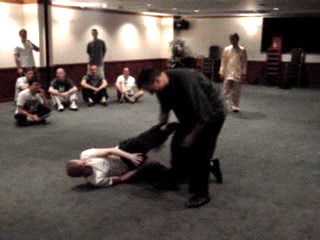 Charles learns the tricks well from the old Monkey, and attempts to pluck some peaches. The young Monkey not only saves his peaches but almost succeeds in giving Charles a Monkey-Tail Kick. Charles tries to subdue the young Monkey, but the young Monkey is skillful, countering with “Scissor-Kicks”.

Tricking an Opponent to Reach for Peaches 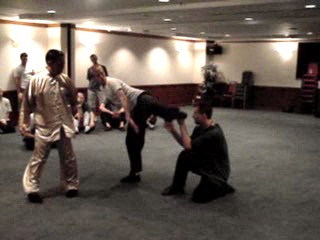 Nick and Charles go over the movements slowly so as to appreciate the beauty of the Monkey techniques. Nick, crafty though young, allows Charles to reach for the peaches. It is a trap. He then grips Charles' hand to prevent him from moving away, and gives him a reversed hanging kick. 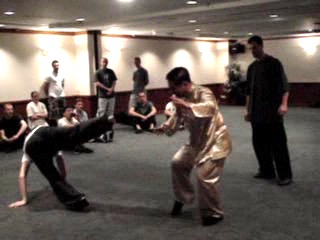 Not only Charles escapes Nick's Monkey kicks, he manages to subdue the young Monkey — or almost. Don't underestimate the Monkey. He has a lot of tricks. You may think you have subdued him, and sometimes he purposely allows you to subdue him. But in a surprised twist, he turns the table back to you.

Amazement and Effectiveness of Monkey Kicks in Shaolin Kungfiu from Wong Kiew Kit on Vimeo.