HOW YOU CAN DEFEAT YOUR OPPONENTS 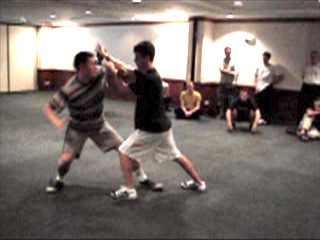 If your opponent fights haphazardly but you use basic kungfu techniques, you are one level higher than him in combat efficiency. If he also uses basic techniques, then your levels are equal. To defeat him, you can improve your techniques, using sophisticated instead of basic ones, in which case you are still one level higher.

If all other factors were equal, you would beat your opponent if you are a level higher in techniques. But other factors are not equal. Even when you have better techniques, but if he uses effective tactics or his skills are better, he may still beat you. Hence, besides improving your techniques, you should also enhance your tactics and skills.

This video series show some of these lessons using a Five-Animal combat sequence as instructional material.

The level of combat can be improved with good footwork. Using good footwork too, Nick directly counters. As indicated by even this short encounter, good footwork is crucial in high level combat.

Raising the Level of Combat 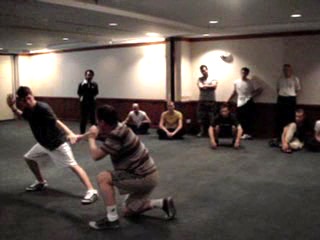 Chris and Nick now go over their improved combat sequence. It is obvious that the combat here is of a higher level than that in our basic combat sequences. There are at least three factors that raise the level of combat. Do you know what these three factors are? When you opponent is at an ordinary level, if you use even just one of these factors you would be one level above your opponent in combat efficiency. 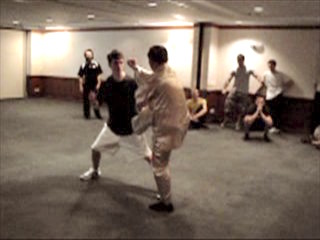 After the pattern “Hungry Leopard Watches Fire”, an excellent follow-up pattern is “Rising Dragon Galloping Tiger”. As soon as the opponent sweeps your arm when you execute the leopard punch, spring up and simultaneously strike his head and kick his groin. Nick responds excellently with the pattern “Yellow Oriole Drinks Water” using the tactic of “no defence direct counter”. His response is the more impressive as it is spontaneous, because the attacks are not pre-arranged but impromptu. 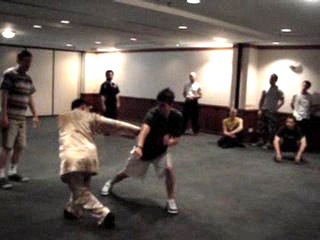 Chris and Nick go over the improved sequence. As Nick executes a phoenix-eye fist at Chris, Chris moves back to defend with the pattern “Dark Dragon Wags Tail”. The response can further be imporved with better footwork. As the double hanging-fists of “Dark Dragon Wags Tail” are too short to reach Nick's arm, you can apply a hand sweep using the pattern “Returning Head Tiger-Tail”.

Some Examples of High Level Combat 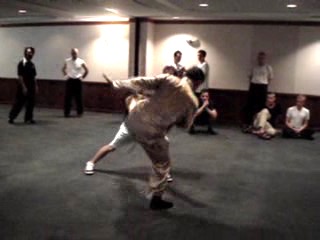 How You Can Defeat your Opponent from Wong Kiew Kit on Vimeo.