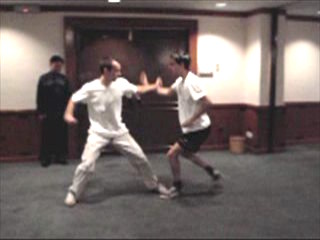 Two important ingredients for combat efficiency are techniques and skills. You need the best forms for the combat situations, and the best ways to put them into action.

The four basic combat sequences also illustrate some effective tactics, and by combining the sequences in various ways they lay the foundation for devising various strategies for combat

Linking Many Sequences into One Continuous Sequence

Eugene and Alex go over Combat Sequences 1 to 4. Eugene initiates and links all the four combat sequences into one long continuous sequence. Eugene has to make a leg-mode adjustment when linking Sequences 3 and 4, because Sequence 3 ends with the right leg in front and Sequence 4 starts with the left leg in front. In this video clip, however, Eugene progresses only to Sequence 3 because Grandmaster Wong intercepts to explain some important points.

Essential to Cover yourself when Attacking 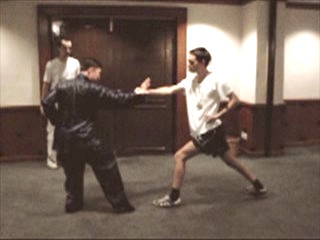 Grandmaster emphasizes that one must cover the opponent while moving in to attack after making the leg mode adjustment. If you merely moves in, you will expose yourself for easy counter-strikes. Grandmaster Wong reminds the participants that they have all learnt these, but he reviews the important safety points so that they will take care of these important points automatically.

The Principle of Safety First 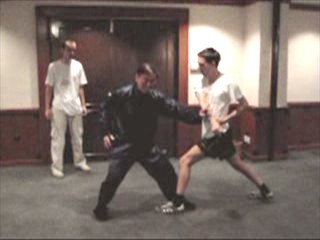 Add a Modification if Needed 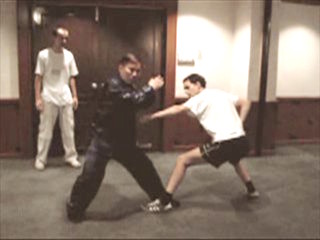 Grandmaster Wong reminds the participants that they must cover not just the opponent's hands but also his legs so that he may not counter with a surprised kick. Instead of closing his hands, you can open them. Be aware that he may counter-strike with his left hand. If he does so, brush it away and continue to attack him as planned. Hence, a modification is added here if needed. 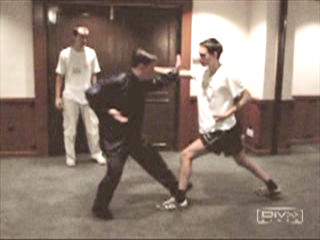 In his defence against Grandmaster Wong's attack, Alex moves his front left leg from a left Bow-Arrow Stance a full step backward to a right False-Leg Stance. Grandmaster Wong says that this big movement is unnecessary. It is sufficient to move the front left leg a small step backward to a left False-Leg Stance. Do you know the advantages of this small leg movement over the bigger leg movement?

Better Spacing for both Defence and Counter-Attack 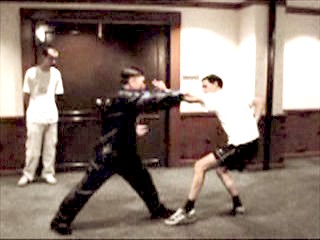 It is not only sufficient to move the front left leg a short space back into a left False-Leg Stance for defence, it also provides a better poise against possible follow-up attack. As shown in the video, if Grandmaster Wong moves forward to continue his attack, he would move into the dragon-hand of Alex. Moreover, it is easier now for Alex to counter attack.

Two Disadvantages of Moving too Far Back 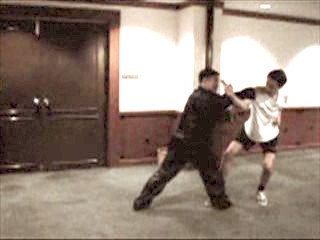 Moving back a big step from your left Bow-Arrow Stance to a right False-Leg Stance may give you more space between you and your opponent, and thus may be safer. But it also makes it harder for you to counter attack. Moreover, if your opponent is skillful, like Grandmaster Wong as shown in the video clip, he can exploit this and it may actually turn out to be more disadvantageous to you.

Three Different Attacks in One Sequence 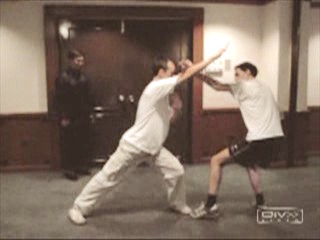 Eugene now completes Combat Sequence 4, which involves a top attack, a bottom attack and a side attack. The sequence should be performed smoothly as if all the patterns in the sequence were one long continuous pattern.

Having Fun with Subtraction and Addition 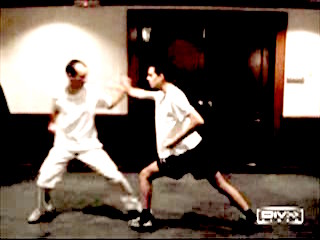