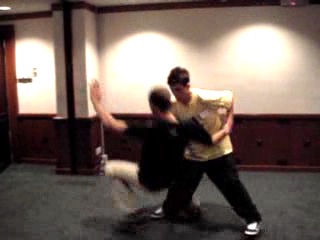 Although the student is much smaller in size than George, he effectively throws George onto the ground

Many people mistakenly think there are few or no throws in kungfu. Actually there are more throws in Shaolin Kungfu than in arts well known for throws like Judo and Wrestling.

Another little know fact is that in arts like Judo and Wrestling, when the exponents throw their opponents, they do not pay much attention to the possibilities that their opponents may strike their vital spots like eyes, throat and groin during the throw. This is because these arts are sports where such drastic attacks are not allowed. But failing to realize this may result in serious injury in real fights where safety rules do not apply.

In Shaolin Kungfu, which is practiced for real fighting, it is very important to ensure you are safe before you attempt to throw your opponents. This video series show four combat sequences where felling and gripping attacks are used.

Throwing an Opponent onto the Ground

A student (he has asked his name not to be mentioned) and George review Combat Sequence 13, which incorporates gripping and felling techniquss using he pattern “Felling Tree with Roots”. Many kungfu practitioners have a mis-conception that there are little or no throws in kungfu. 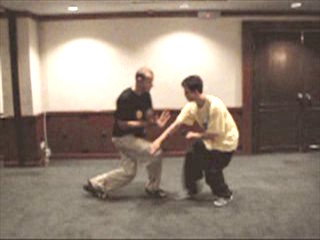 George neutralizes the student's gripping and felling attack using the pattern “Double Butteflies Flying Together”. It is the circular movement of the Butterfly Palms at the Unicorn Step that overcomes the attack, followed by a palm strike. Being merciful, George just pushes the opponent away instead of striking him. 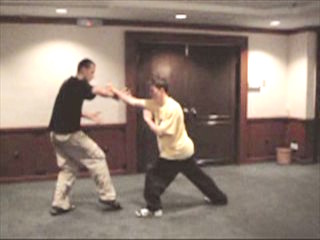 George attacks with a Black Tiger, but hesitates after this move. He tries to throw the opponent using “Lead Horse Back to Stable”, which also incorporates gripping. But it is not effective due to a wrong leg mode. If he wishes to fell his opponent at this point, George should use “Fell Tree with Root”. To execute a “Lead Horse” throw effectively, George should force his opponent to retreat a step, which he later does. 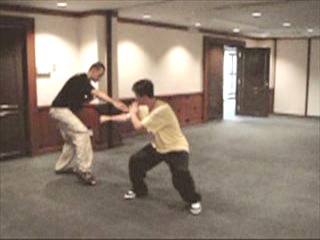 George attacks his opponent with continuous cannons, As the opponent counter-attacks using “Black Tiger”, Georges grips the opponent's arm and attempts to fell him using “Lead Horse Back to Stable”. The opponent neutralizes with “Hide Flowers in Sleeves” and follows up with a “Precious Duck”. George counters with “False-Leg Hand Sweep”. These movements constitute Combat Sequence 14, which is named “Lead Horse Back to Stable”. 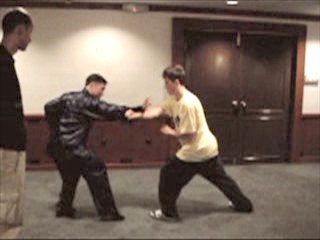 George responds to the opponent's attack with “Single Tiger”. Grandmaster Wong explains that his “Single Tiger” movement is too large and redundant, and demonstrates how it should be done.

Why Isn't it a Good Throw? 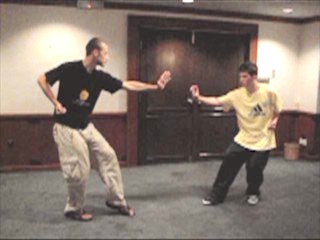 Although the student is smaller in size, he fells George cleanly onto the ground using the Shaolin pattern “Farmer Hoes Rice Field”. But Grandmaster Wong says it is not a good throw. Do you know why? As a clue, the answer shows a crucial difference between a fighting art like Shaolin and a martial sport like Judo. 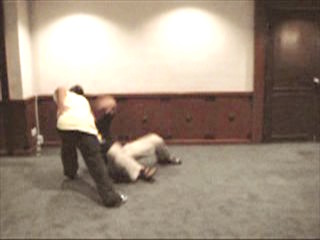 The student's throw shown in the previous video clip wasn't a good throw because George's other hand was free to strike him. The student should lock this free hand to prevent a possible strike, as shown in this video clip. 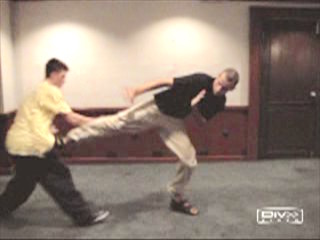 Importance of Coverage When Moving In 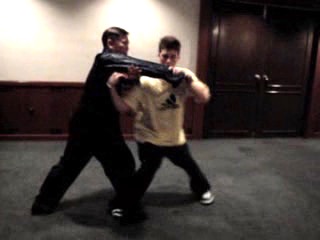 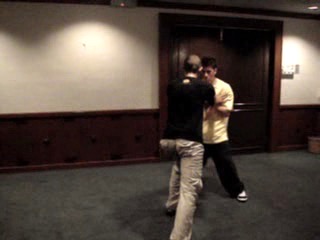 As the student moves in to attack, George steps aside and pushes the student away using “Fierce Tiger Pushes Mountain”. George could have struck the opponent, but being merciful he merely pushes him away. Grandmaster Wong comments that George positions himself too far away for a powerful push.

Pushing from the Back Leg 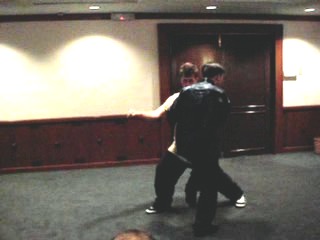 Grandmaster Wong explains that the back foot should be placed near enough to the opponent to affect a powerful push from the back leg, and not from the shoulder. The student responds with a thrust kick, to which Grandmaster Wong counters with a Single Whip. This is Combat Sequence 16, named after the pushing pattern “Fierce Tiger Pushes Mountain”. 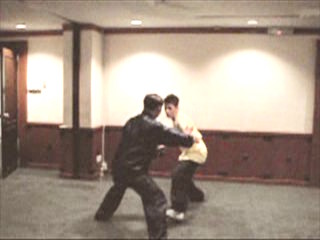 Grandmaster Wong and the student demonstrates Combat Sequence 16, which is named after the principal attack pattern “Fierce Tiger Pushes Mountain”. In this situation Grandmaster Wong could strike the opponent, but pushing him away is merciful.

Felling and Gripping Techniques in Shaolin Kungfu from Wong Kiew Kit on Vimeo.