INTERESTING MONKEY PATTERNS THAT ARE DEADLY FOR COMBAT The Monkey Set is also full of interesting patterns where their combat functions may not be obvious to the uninitiated. “Hiding Peaches under Armpit”, for example, may be used to take your opponent for a walk without giving him an opportunity to strike you!

When a Monkey stylist executes a pattern like “Happily Pluck Fruit”, of course, he does not merely pluck fruit. He may pull of your ear or dislocate your neck.

What do you think a Monkey stylist actually does when he catches fleas from his, or your, body? One interesting combat function of this pattern is to release himself from a powerful grip or lock, and strike or grip the opponent instead. Monkey patterns can be quite comical. But it is not just for comedy that these patterns are practiced. Besides serving some useful combat functions, these comic patterns also help to inculcate qualities like cheerfulness, physical as well as mental agility, and being relaxed even in demanding situations. The pattern “Happily Pluck Fruit” can be a deadly chin-na technique. Amongst other applications, it can be used to pull off an opponent's ear, control him by gripping his neck, or kill him by dislocating his head.

Taking an Opponent for a Walk Here is another interesting pattern called “Hide Peach in Armpit”, which can be quite comical yet hold your opponent at your mercy. If you like, you can take your opponent for a walk with little risk of him striking you. But, of course, if he is skillful, he can counter effectively.

Releasing from a Seemingly Impossible Lock

How would you counter such a seemingly impossible pattern where your head and one or both of your hands are locked in an opponent's armpit? One effective counter, suggested by Nick, is “Spiritual Monkey Washes Face”. It is inspiring to see Nick releases himself with ease from this seemingly impossible grip held by Charles who is much bigger in size than Nick. The Monkey Set is full of funny patterns. Here is one named “Spiritual Monkey Washes Body”, which is also called “Naughty Monkey Catches Fleas”. Can you think of some combat situations where this pattern can be useful? Grandmaster Wong purposely asks Chris, a powerful, big-sized exponent who specializes in Tiger-Claw, to grip Nick in a chin-na technique. But using “Naughty Monkey Catches Fleas”, Nick easily releases himself from Chris' powerful grip, which even surprises the big-sized opponent.

Grips and Locks are Formidable to Monkeys 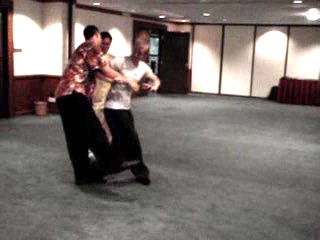 Nick applies the pattern “Old Monkey Looks at Mountain” to counter Charles' double arm lock on his body. As Monkey stylists are generally small in size, grips and locks are formidable to them. Hence they must be able to counter such attacks effectively if they wish to be competent in the Monkey Style. Nick demonstrates a combat application of “Naughty Monkey Charges at Sand” and “Old Monkey Looks at Montain”. If an opponent moves in to grab your groin when you execute a Monkey Tail Kick, the Unicorn Step of “Old Monkey” will neutralize the attack, while simultaneously striking the opponent's chest with your elbow.

Interesting Monkey Patterns that are Deadly for Combat from Wong Kiew Kit on Vimeo.