FELLING TECHNIQUES OF THE DRAGON AND THE MONKEY 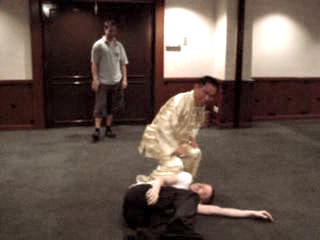 Grandmaster Wong fells Nick using a False-Leg Stance, demonstrating that a Monkey stylist is both agile and solid, because the agile False-Leg Stance is normally considered not solid enough for executing felling techniques

As the intended combat sequence should contain a felling technique, participants choose Combat Sequence 13, “Fell Tree with Roots”, as a base. In their Dragon sequences, George uses “Fierce Dragon Across Stream” and also “Chop the Hua Mountain” instead of “Double Butterflies Flying” to counter the throw.

Normally a solid stance, like the Horse-Riding Stance, is used to execute throws. But in the Monkey sequences, Grandmaster Wong uses the agile False-Leg Stance instead, demonstrating that a Monkey stylist can be agile and solid at the same time. 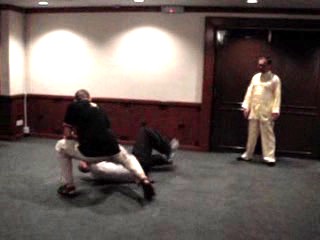 George and Daniel are working out a combat sequence from their specialized Dragon-Form Set where felling techniques are involved. They start with the backward throw found in our basic Combat Sequence 13, “Fell Tree with Roots”.

How to Formulate your own Combat Sequences 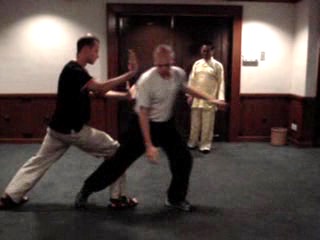 In our basic Combat Sequence 13, the counter to “Fell Tree with Roots” is “Double Butterflies Flying”. George modifies the counter slightly to “Fierce Dragon Across Stream”. This is a good way to formulate your own combat sequences. 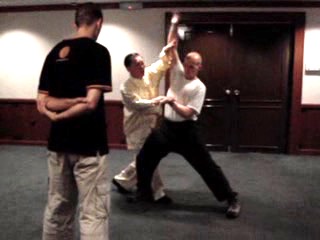 George shows another counter. Instead of using “Fierce Dragon Across Stream”, now he uses “Chop the Hua Mountain”. Grandmaster Wong demonstrates the fine points in deflecting an opponent's hand using his elbow. He then shows yet another counter, “Fierce Tiger Scratches Sand”, which is similar in principle to “Black Bear Sinks Hips” in Taijiquan. Isn't kungfu rich and beautiful?

Agility and Solidness of Monkey Kungfu

Nick and Sifu Roland formulate their combat sequence from their Monkey Set incorporating felling techniques. They also start with our basic backward throw in Combat Sequence 13, namely “Fell Tree with Roots”. Nick counters with “Jade Girl Kicks Shuttle”. Grandmaster Wong says that the backward throw is normally executed in a Horse-Riding Stance which gives a solid base to the attack for the throw. But a Monkey stylist is both agile and solid. So he may uses other stances to execute the throw.

Executing a Throw on a False-Leg Stance

Normally the False-Leg Stance is not suitable to use for executing a throw because it lacks a solid base. But a Monkey stylist can still be solid, and agile, in his False-Leg Stance, and therefore uses it for a throw, like what Grandmaster Wong does, as if without effort! Throwing a light Monkey like Nick is easy. But what about throw a gorilla like Sifu Roland? 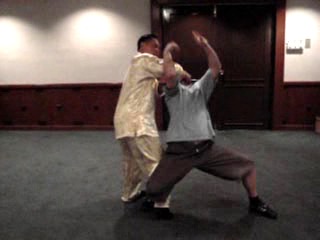 Grandmaster Wong throws Sifu Roland, who is big and heavy like a gorilla, almost effortlessly! What is the secret of the effective throw? Off-balance your opponent first, then throwing him will be almost effortless. With your hand on his throat, and pushing him back, he almost falls on his own.

Advantages of False-Leg Stance over Horse-Riding 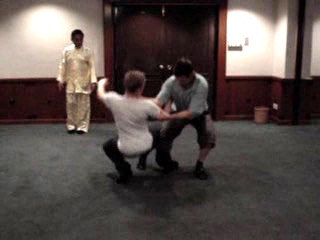 Felling Techniques of the Dragon and the Monkey from Wong Kiew Kit on Vimeo.