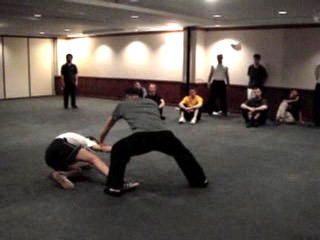 When a bigger and stronger opponent grips your arm and presses you onto the ground, straight-forward punches or kicks would be inadequate. You would need elaborate movements to neutralize the complex situation.

Many kungfu practitioners do not believe that elaborate kungfu patterns can be used for fighting. Indeed, in the 1970s when Karate and later Taekwondo became popular, some traditional kungfu masters attempted to simplify kungfu, doing away with elaborate forms like Tiger-Claws and Dragon-Hands, and emphasizing straight-forward blocks and punches. Following the examples of Karate-do, Taekwondo and Judo, some also placed the term “do” behind the name of their arts or schools.

Elaborate kungfu forms were not invented. They evolved naturally from simpler forms as combat situations became more complex. If an opponent throws you a straight-forward punch, for example, you may respond with a straight-forward block. But if he also grips your hands as he punches, and especially when he is stronger and bigger in size, a simple block would be inadequate. You would need elaborate movements to release yourself from his grip despite his strength and size besides defending against his punch.

Enhancing Effect with a Lower Stance 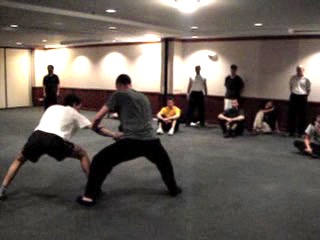 Sifu Innes responds to Alex's strike with “Lohan Tames Tiger”. Grandmaster Wong shows Sifu Innes how he can enhance the effectiveness of his attack by going lower in his Horse-Riding Stance.

Enhancing Skills Rather than Learning Techniques

The effect of a lower stance while pressing on Alex' arm is obvious, making it difficult for him to escape. But Alex has a good counter. Nevertheless, while the technique is correct, his skill in implementing the technique needs improvement. In fact, one of the main objective of learning from a master personally is to enhance skills, and not just to learn techniques.

Catch Tiger in the Mountain 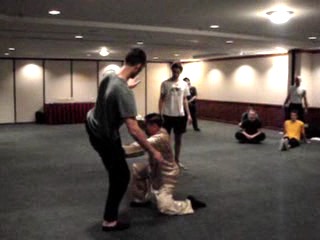 Sifu Innes has an excellent counter against Alex' Precious Duck. Alex squats down to avoid Sifu Innes' whirlwind kick. Grandmaster Wong improves Alex's response by changing it from a defence move to a counter-strike, using the pattern “Catch Tiger in the Mountain”. This is a deadly pattern, though many people think that it is only for demonstration.

From Straight-Forward to Elaborate Responses 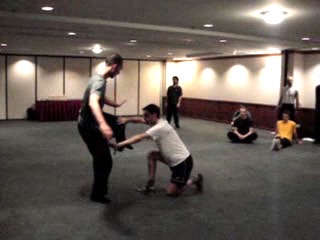 Many people argue that the patterns in this combat sequence are too elaborate to be effective for combat, forgetting that they are also unable to apply straight-forward kungfu patterns for fighting. If the patterns are elaborate, they are not made so to please spectators, but to meet combat situations that have advanced from the straight-forward. 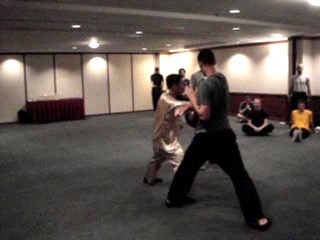 Can Elaborate Patterns be Used in Combat? 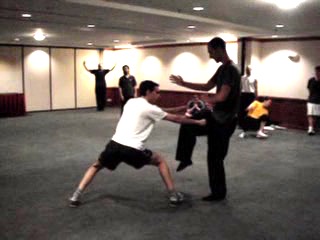 Can elaborate kungfu patterns be used in real fighting? Will combatants be fast enough to use them? Of course the combatants can be fast in the application of elaborate patterns if they train systematically and sufficiently. It is evident from the video clips here that even after just a few minutes of repeating the combat sequence a few times, Alex and Sifu Innes are more competent in their application. Imagine how much more efficient they will be if they continue practicing systematically for half a year. 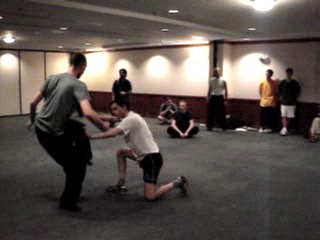 In this video clip, both Alex and Sifu Innes are quite fluent in their combat sequence with elaborate patterns, especially when compared to the first time shown in this video series. If they keep practicing this combat sequence for half a year, and apply it on an opponent who only uses straight-forward patterns, they have a good chance of beating him.