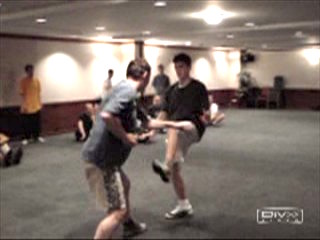 The elegant Crane, manifested in this deadly organ-seeking kick, is one of the many features of the Five-Animal combat sequence

“Fierce Tiger Descends Mountain” is an illuminating pattern applying the technique of the Double Tiger Claws. Its movement is simple, but application profound. Important factors for its successful application, like appropriate body-movement, good footwork and pressing hand techniques, are demonstrated. Together with “jing”, “shen”, “qi”, or essence, mind and energy, these three factors constitute the six harmonies that are very important in Shaolin Kungfu. 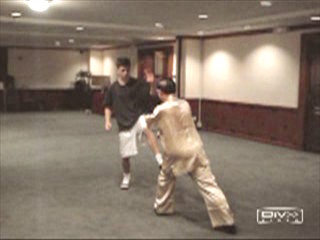 Chris can still use “Fierce Tiger Descends Mountain” although he has changed his leg mode. All he needs to do is to apply the principle “jow ma wun pou” (Cantonese), which means “move stance change step”. This principle is very useful in many different situations once you understand its varied applications.

Slanting Hit instead of Head-on Strike 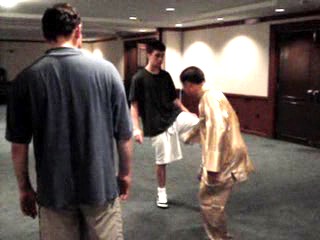 Instead of striking the leopard punch directly onto the hard bones of the kicking leg, it is advisable to use a slanting hit. This prevents head-on collision which may hurt the leopard fist, as well as using our hard knuckles to strike at the soft spot of the opponent's knee.

Movement should be Smooth and Elegant 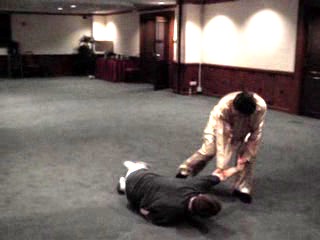 Chris' repeated pulling back of his feet instead of stepping back results in clumsy movement and poor control. The movement should be smooth and elegant. When Nick is hesitant he is thrown onto the ground. 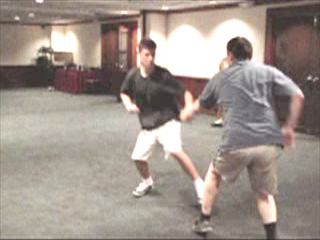 Chris' “Fierce Tiger Descends Mountain” is ineffectual because of poor spacing. He is too far away from the opponent. This pattern uses a “pressing technique”. The exponent must be close enough to press in or press down. First he “shallows” to avoid the opponent's attack, then he “shoots” forward to press in.

Chris attempts the pressing technique again. But he is still too far from his opponent to be effective. The movement of “Fierce Tiger Descends Mountain” is simple. It is good spacing and good timing that make the technique profound.

Bending the Body Deeply to Press 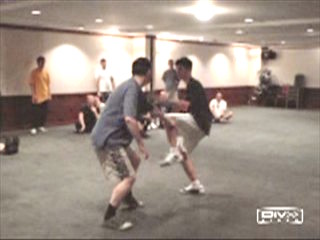 This time Chris has better spacing and timing when applying “Fierce Tiger Descends Mountain” on Nick. However he does not bend his body deeply enough. He should also reach out his Tiger-Claws to press on Nick's face. His second Tiger-Claw attack, however, is poor in spacing. How could you improve it?