CAN YOUR RESPONSES STILL BE CORRECT AND SPONTANEOUS IN REAL FIGHTS? 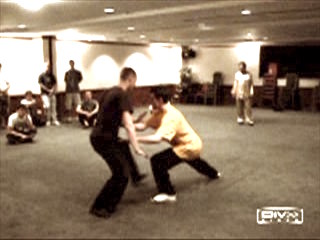 First, we train slowly. Then when we are familiar with our movements, we increase the speed. With systematic practice, our responses can be fast and spontaneous in a real fight.

A legitimate question many people ask is whether fixed routine of combat sequences can be useful in real fighting where combatants do not follow any fixed order in their attack and defence. Of course the answer is yes, which most of you have discovered from your own direct experience.

But how could someone trained in a fixed routine be able to respond correctly and spontaneously when an opponent attacks him out of context? This is an academic question, but we shall still answer it.

It is worthy of note that we have the experience first, then we find the answer from our experience. This was actually how Shaolin philosophy developed.

Briefly, our combat sequences provide us a means to use the best techniques for particular combat situations. When an opponent executes a kick, for example, instead of thinking of what technique you should choose from your set to respond to the kick, you respond with the technique from your combat sequence. If you practice this sufficiently, your response will eventually become spontaneous.

But instead of executing a kick, your opponent throws you a punch at the point where a kick is supposed to be used. Would you respond to his attack as a kick as in the routine, instead of as a punch as in the real situation? No, you would spontaneously respond to the attack as a punch, if you have been properly trained, especially in the variation and addition aspects of our sparring methodology.

The video clips below capture some of these training lessons.

Aim for Effectiveness, not Spectacular Show 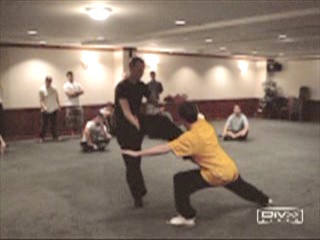 As a counter to Peter's kick, Adam swings his kicking leg to fell him. Grandmaster Wong comments that while this is spectacular, it is not a good counter. An agile opponent may jump up and kick at Adam's throat, using the pattern “Swallow Flies through Clouds”, reversing defeat into victory. Adam's revised response, striking the kicking leg followed by dotting the opponent's vital point, is more practical.

Neutralize and Counter with Body-Movement 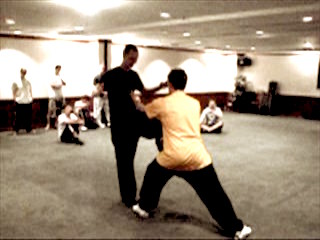 Adam uses another response to Peter's organ-seeking kick. After striking the kicking leg, he follows up with “Comet Chases after Moon”. Adam pushes away the attack and counter-attacks with an arm chop onto Adam's chest. But Peter makes the same mistake as before. He goes onto the attack, instead of “swallowing” it away. He revised counter, “Dark Dragon Draws Water”, is better. By using appropriate body-movement, he neutralizes Adam's attack and counter-strikes Adam at the same time

Some critics may say that in a real fight there is no time to figure out the best counters. They have to respond quickly, often instinctively. This is fighting without any art, which is low-level fighting. In an art with systematic training start slowly, choosing the best responses for the occasions. We have to practice our planned responses many times until the responses become second-nature to us. Then in a real fight, we can respond correctly and spontaneously. 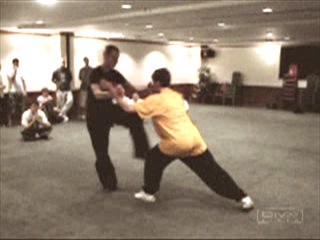 Many martial artists consider kungfu patterns too elaborated to be effective in real fighting. Hence, they prefer to fight “naturally” or at best use simple forms of punching, kicking and blocking. This is due to ignorance and shallow thinking. Our kungfu patterns were not invented, but evolved from centuries of actual fighting. They represent the crystallization of the best responses in particular combat situations.

Finalizing a Combat Sequence for Training 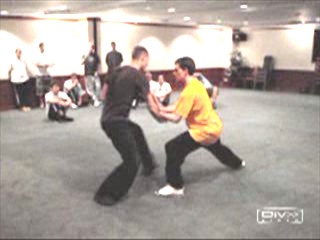 Peter and Adam go over the combat sequence they have just worked out. Their movements are quite slow because not only they have just finalized it, they also like to take note of fine points, which would be missed if the sequence is performed too fast. But can they perform the sequence fast in sparring or actual fighting? Yes, they can, if they have spent sufficient time training correctly. 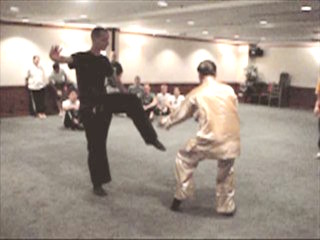 Can your Responses still be Right and Spontaneious in Real Fights from Wong Kiew Kit on Vimeo.