FELLING AN OPPONENT WITHOUT HIM REALIZING WHAT HAS HAPPENED 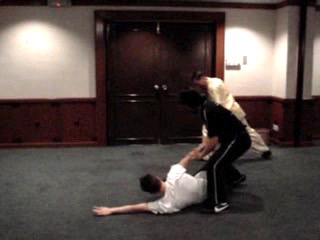 As mentioned earlier, throwing is only one of many techniques in Shaolin Kungfu used to fell an opponent onto the ground. Shaolin Kungfu makes uses of a great variety of methods, which are also very versatile. A Shaolin master may change from one felling technique to another, yet still using the same pattern.

Starting from the basic Felling Technique 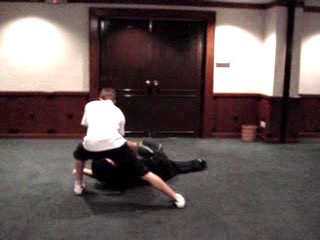 Nick and Dr Damian are formulating a combat sequence from their specialize Five-Animal Set incorporating felling attacks. Like the others, they use Combat Sequence 13, “Felling Tree with Roots”, as a base to start with. Notice that if you are familiar with this sequence, it is quite easy to fell an opponent. 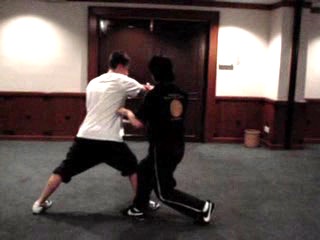 Dr Damian starts his modification from the basic counter using a Unicorn Step. Dr Damian could press down at Nick's arm using “Lohan Tames Tiger” to fracture it or dislocate Nick's elbow, but he chooses to strike Nick's ribs with a leopard punch. Nick responds with “Green Dragon Shoots Pearl”. 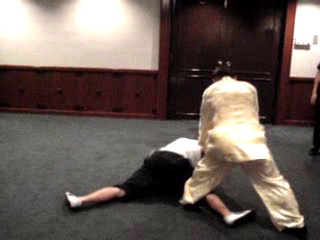 Instead of applying “Lohan Tames Tiger” in the normal way using a Bow-Arrow Stance, Grandmaster Wong first fells Nick on to the ground using a “leg-drag”. This is one of many ways in Shaolin Kungfu to fell opponents. The pattern used is still “Lohan Tames Tiger”, but executed in a different way, resulting in better control of the opponent, illustrating again the beauty and profundity of Shaolin Kungfu. 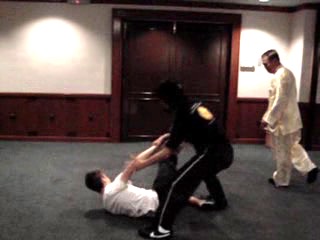 Dr Damian applies the “leg-drag” to fell Nick onto the ground. The back leg of the Unicorn Step is used as an anchor. The fall is unexpected, and may result in the opponent breaking his arm or leg. So do be very careful when applying this technique on a sparring partner, who must also know how to break fall. Notice how Nick breaks his fall without sustaining any injury. 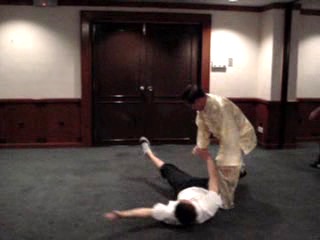 Grandmaster Wong illustrates the fine points in applying the “leg-drag”. Often the opponent does not know how or why he falls. Make sure you do not expose your groin when your opponent is on the ground.

This time Dr Damian applies the “leg-drag” felling technique very well. Nick breaks fall very well too. If one could maintain this rate of progress, within six months of training he can execute the technique flawlessly. 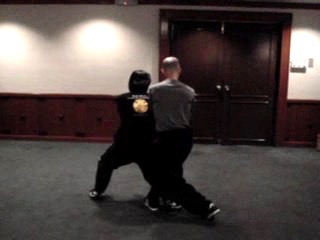 This is the first time Dr Damian and Sifu Anthony are working out this sequence. Hence, their movements are slow and interrupted. Dr Damian is acting as an attacker to help Sifu Anthony formulate some effective counters against throws. 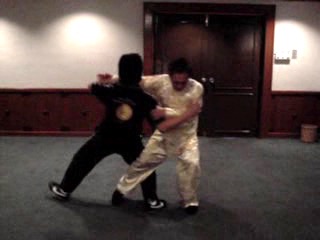 This is the “Pakua Palm Technique”. As its name implies, it is a signature pattern and technique in the Shaolin Pakua Set. However, as the situation warrants it, the frontal Bow-Arrow Stance is changed to a reversed Bow-Arrow Stance, thus applying the pattern like “Lead Horse Back to Stable”. Note the three harmonies of hands, body and feet, which are necessary for a successful application of the felling technique.

Felling an Opponent Without him Realizing What has Happened from Wong Kiew Kit on Vimeo.