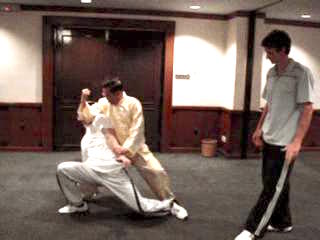 In many other martial arts, if your opponent is bigger and stronger, you will have little chance of felling him. But not in Shaolin Kungfu. You will learn the secret in this video series.

You will also learn how to use patterns that are not normally associated with felling, to fell your opponents. You would probably associate “Hungry Tiger Catches Goat” with gripping, “Z-Shaped Butterfly Palms” with striking, and “Bar the Big Boss” with intercepting a whirlwind kick. But in this video series you can use them for felling. 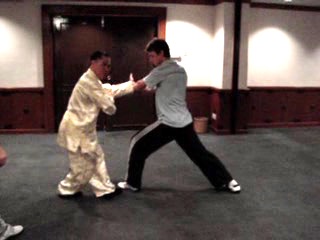 Grandmaster Wong shows Andy how to use the transitional Unicorn Step to avoid Steve's stepping attack, and then fell Steve onto the ground. This pattern is called “Z-Shaped Butterfly Palms”, and is found in the Dragon-Tiger Set. 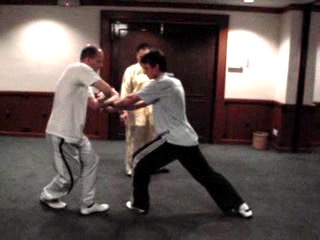 Andy and Steve go over what Grandmaster Wong has demonstrated. The Unicorn Step used in this counter is very versatile. Can you think of some useful ways this Unicorn Step can be used?

Four Ounces against a Thousand Tons 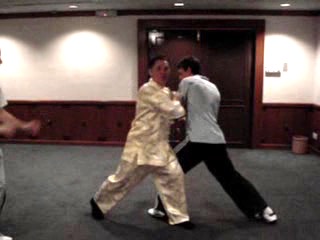 Grandmaster Wong illustrates the fine points of the footwork and spacing involved in this counter using the Unicorn Step, which manifests the kungfu saying of using four ounces against a thousdand tons. Not only you can avoid your opponent's attack, even without using your hands, but also you can strike him or feel him onto the ground.

Countering with the Same Pattern 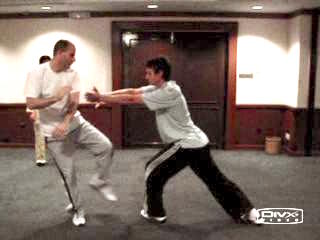 Andy attempts to fell Steve using the pattern “Z-Shaped Butterfly Palms”. Interestingly, Steve uses the same pattern to fell Andy. But in this case, Steve pushes Andy away instead of felling him. 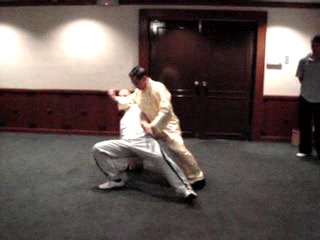 Grandmaster Wong demonstrates the fine points involved in deflecting an opponent's hands at the Unicorn Step. To enhance the effectiveness of the felling attack, Grandmaster Wong changes from using a push or a sweep with the Butterfly Palms to using a downward elbow strike, with the opponent landing on Grandmaster Wong's knee as he falls. This pattern is “Bar the Big Boss”.

Off-Balance an Opponent Before Felling Him

Grandmaster Wong shares another secret. To fell an opponent effectively, you must first of all off-balance him. You don't wrestle with him. Notice that Grandmaster Wong has the opponent under full control. How would you escape or counter if you were caught in a situation as Andy?

The Richness of Shaolin Kungfu 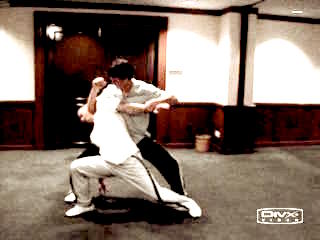 Steve applies the technique just shown by Grandmaster Wong. The pattern used is “Bar the Big Boss”. Incidentally this application also shows the richness of Shaolin Kungfu. In that “Bar the Big Boss” has more combat functions than what many people may think.

Beautiy and Profundity of Felling Techniques from Wong Kiew Kit on Vimeo.