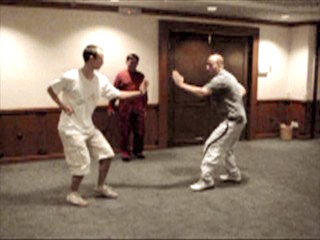 Here is a common theme in kungfu movies. A challenger defeats a master. The master is defeated because he does not know how to counter a special technique the challenger uses.

The best student of the defeated master travels all over the country to find the counter-technique. At last he finds it. He returns to defeat the challenger using this counter-technique, restoring the glory of his school on behalf of his master.

This scenario is for the movies. In reality, every master knows the counter of any attack. If he is defeated, it is not due to his ignorance of the counter but due to his insufficient skill to apply it successfully. In combat, skills are usually more important than techniques.

The video series below, which shows a combat application of th Dragon-Tiger Set, captures some of these lessons on skills and techniques. Have some fun. Can you tell the occasions in the video clips where skills make the difference between applying the same techniques ineffectively or effectively? And do you know what skills are involved?

Developing from the Basic 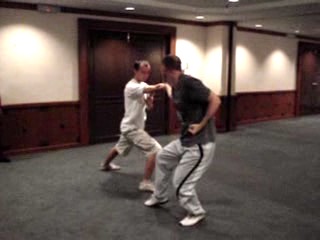 Here Eugene and Andy go over their combat sequence in details. As Eugene attacks with a Fierce Tiger, which is the start of the basic combat sequences 5 to 8, instead of responding with Single Tiger as in the basic sequences, Andy grips the attacking arm and counters with an arrow punch using the pattern “Pull Bow Shoot Arrow”. Eugene counters with a combination of “Hiding Flowers in Sleeves” and “Golden Axe Chops Rock”. But the counter is unrealistic if the opponent really grips the arm. 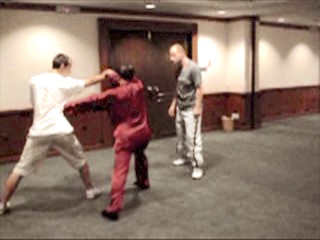 When Andy really holds Eugene's arm, it is not so easy for Eugene to apply his counter. He should first avoid Andy's arrow punch by sinking back and deflecting the punch with his other hand. Then he can release the grip with a circular movement, and counter with an organ-seeking kick.

How could you move back to avoid his punch when your opponent is holding your arm and pulling you? Here Grandmaster Wong shows the mechanics of this technique. Although he cannot move back because his arm is being pulled, he can avoid the punch by sinking his stance. Then he releases the grip and counter with “Yellow Oriole Drinks Water”.

The Importance of Proper Balance 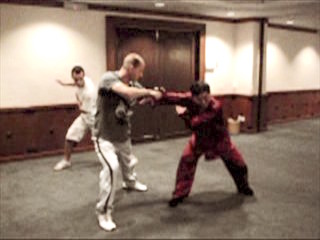 Eugene counters with a kick. Nevertheless, his is a sweeping kick, using the pattern “Naughty Monkey Kicks Tree”. “Yellow Oriole Drinks Water” is a better choice as it gives better balance. In the video clip Eugene is hesitant, which means that could be struck by his opponent. But this is only a work-out session. When he is familiar with the sequence, he can be fast and spontaneous.

Hiding Flowers in the Sleeves 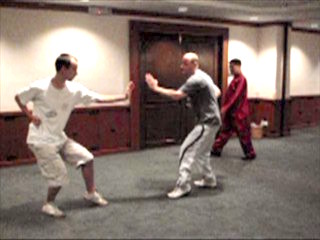 In his counter, Eugene could not release the grip completely because he did not turn his hand. Suspending the other aspects of the combat situation, he can easily release the opponent's grip. This pattern is called “Hiding Flowers in the Sleeves”. 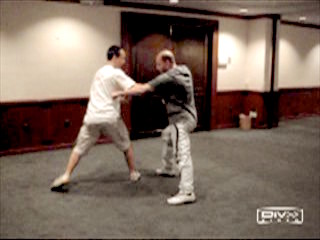 Andy grips Eugene's arm. Eugene responds by kicking Andy. Eugene should release the grip first. He can then strike Andy's face, or kicks him. 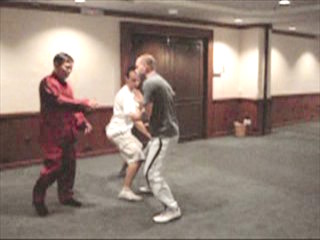 Now Eugene can execute his Golden Axe effectively. Can you see the crucial point that transforms Eugene's originally ineffective technique to become effective? Do you also notice that Andy's response is the famous Double Butterfly Palms, which are often performed by Shaolin students but their applications are seldom known? 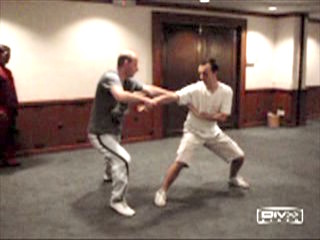 Having good stances is important in being able to move back a step in a difficult situation. If an attacker throws his body forward, as is common in some martial arts, it would be easy for Eugene to strike the attacker with his Butterfly Palms.

Skills are Usually More Important than Techniques from Wong Kiew Kit on Vimeo.