ENSURING OWN SAFETY WHEN FELLING OPPONENTS 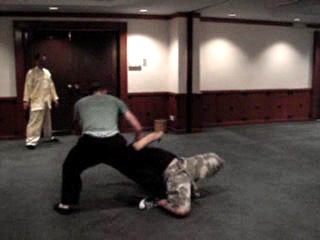 Shaolin Kungfu is very rich in felling techniques, though not many people may be aware of it. Traditionally there are “Eighteen Felling Techniques of Shaolin”. Throwing is only one of these felling techniques.

Because Shaolin Kungfu is a martial art not protected by safety rules, much importance is paid to ensuring one's own safety before attempting to throw an opponent. Hence, many throws and other felling techniques found in marital sports like Judo and Wrestling, where the exponent is often exposed to counter-strikes while felling an opponent, are considered untenable in Shaolin Kungfu.

A Shaolin practitioner, for example, would not grip an opponent's collar with his two hands to attempt a throw. This would offer the opponent a good opportunity to strike his eyes or groin.

After felling an opponent onto the ground, you must also ensure that your opponent has little or no opportunity to strike your vital spots. This is another aspect that exponents of martial sports may not pay much attention to because they are protected by safety rules. 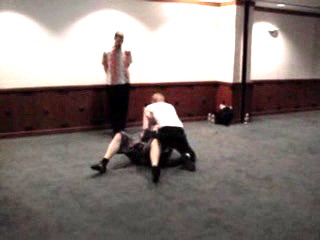 Students work out how to apply the Tiger-Claw to overcome a difficult combat situation. Sifu Roland pins Nick Jones on the ground, but Nick manages to free himself and pins down Sifu Roland instead. 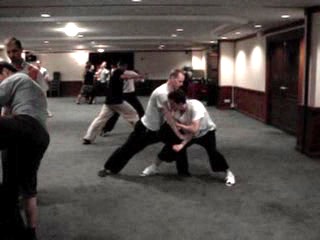 On the right side Adam practices releasing his arm from being held by Peter using Dragon movements. On the left Chrales suggests using a knee strike to counter an opponent gripping your neck. Nick and Sifu Roland act on Charles' suggestion. 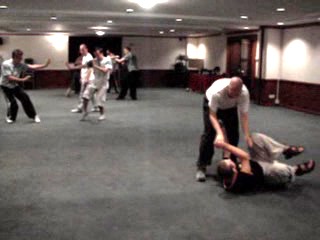 Daniel, who is much smaller in size, throws George onto the ground, and follows up with a coup de grace. Eugene avoid Steve's whirlwind kick using body-movement, while Andy looks on. In the background, Grandmaster Wong demonstrates how to release a grip on his arm and then throws the opponent backward onto the ground.

Felling an Opponent with a Horizontal Sweep 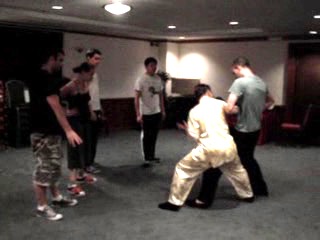 This is a closer look on Grandmaster Wong's demonstration on felling an opponent. Grandmaster Wong could fell Sifu Innes with a horizontal sweep using the pattern “Horizontally Sweep a Thousand Army”. 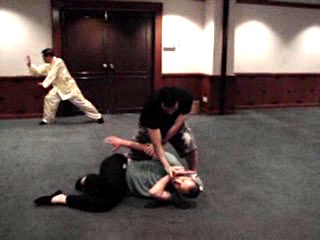 Sifu Eugene applies the pattern “Hungry Tiger Catches Goat” to fell Sifu Innes, and follows up with a Tiger-Claw attack on the opponent's throat. This felling technique is similar to the one implemented by the pattern “Fell Tree with Roots”. 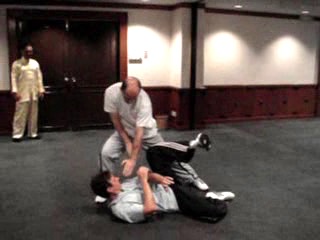 Ensuring Own Safety when Felling Opponents from Wong Kiew Kit on Vimeo.