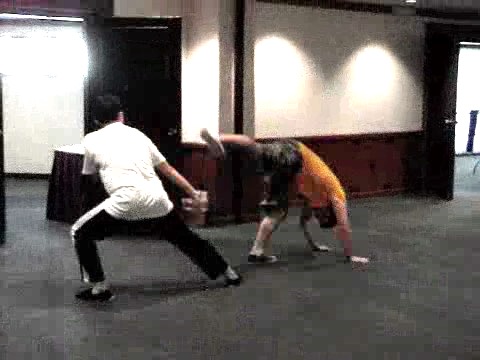 Can you See any Secrets in this Picture?

Here are two interesting stories about Grandmaster Wong which he has told many of his inner-chamber disciples.

In his young days Grandmaster Wong used to search for black-belts for friendly sparring in order to confirm his combat efficiency. Taekwondo was very popular then, and many martial artists were at a loss of how to defend against the Taekwondo side-kicks. Grandmaster Wong learned an excellent counter from his sifu, Grandmaster Ho Fatt Nam, who taught him the pattern “Two Tigers Subdue Dragon”. He used it so well that in his friendly sparring soon no one dared to execute side-kicks at him, as he would lock the opponents' kicking legs without fail.

Pitying him, another siheng, Phok Kai (who you may remember caused an internal injury on Grandmaster on another occasion with a “gentle” punch two inches away) came over and whispered to Grandmaster Wong an important secret regarding this counter. Now you don't have to bloody your face to learn this secret. Molly demonstrates some beautiful patterns from the Tiger-Crane Set. Do you know how to apply them in combat? In kungfu, there is at least one combat application for every pattern. Some patterns may look simple, but their applications can be quite profound. Grandmaster Wong suggests to Molly to lower her leg after the first kick before executing a second kick. What advantages can you think of Grandmaster Wong's suggestion? And do you know why Molly are performing these patterns in this way?

Exploding Sound as your Explode Force Grandmaster Wong asks Sifu Innes and Molly to explode their voice too when exploding force. Making appropriate sounds not only enhances the force but also regulates breath control. Do you know the combat applications of the patterns shown? Using Leg to Ward off Attacks The techniques demonstrated here are quite advanced. Grandmaster Wong advises Wuji to use his leg to ward off Eugene's attack, and follow up with a side-kick. Because they are new to these techniques, their movements are hesitant. But with sufficient practice, their movements will not only be smooth but probably more sophisticated than many opponents can handle.

This video clip reveals some well-kept secrets. What would you do if your kicking leg is being held? An excellent counter is the tiger-tail kick.

Two Stories about Kicks from Wong Kiew Kit on Vimeo.