A BAG FULL OF MONKEY TRICKS 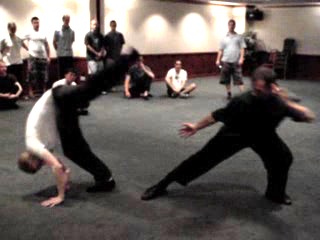 The Monkey is known for tricks. He may pretend to attack your face, then kicks your groin. He may run away, then surprise you with a monkey-tail kick. 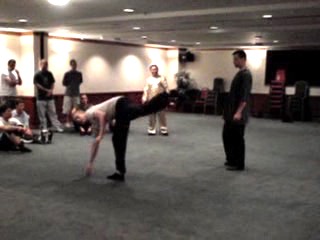 Instead of using the straight monkey-tail kick, Nick uses a reversed-hanging kick, or sweeping monkey-tail kick, as in the pattern “Naughty Monkey Wags Tail”. A Monkey may pretend to run away, and then fall. As the opponent moves in, he may become a victim of the Monkey trick, being struck as if from nowhere by the waging-tail Monkey kick.

I've Warned you to be Aware 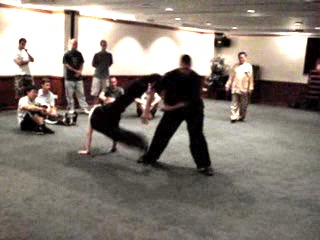 As Charles, an up-coming Monkey, reaches for the peaches, Nick responds with a sweeping monkey-tail kick. Charles grips the kicking leg. But Nick gives another Monkey kick, this time a straight monkey-tail kick that hits Charles. “There, I've warned you to be aware of the Monkey's tricks!” 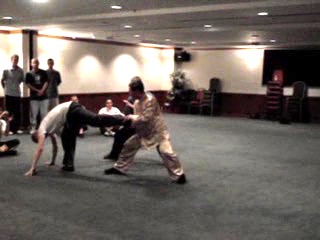 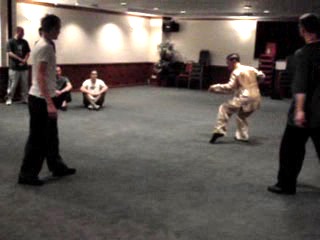 As Charles reaches for the peaches, Nick responds with a sweeping monkey-tail kick. Charles can use body-movement to avoid the reversed sweeping kick. Alternatively, he can move away using Monkey steps. In case of difficulty or doubt, like when you are unsure whether your opponent is playing some tricks, it is a good strategy to move back.

Rolling to a Preferred Side 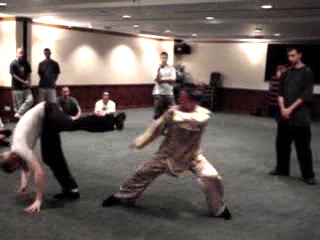 After executing the sweeping monkey-tail kick, Nick rolls away. It is advisable for Nick to roll to another side. What advantages do you think Nick would have by rolling to the other side?

Now Nick rolls to the other side. It is obvious from the video that this roll is smoother. It is also easier for Nick to execute a tricky kick as he rolls. Small points like these make a difference in advanced level combat.

How you may Minimize the Risks of Monkey Tricks 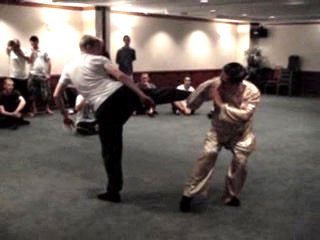 Grandmaster Wong and Nick go over the combat sequence slowly so that the fine points can be more easily seen. Notice that Grandmaster Wong covers Nick's hand before moving in to counter-attack, as well as slides along Nick's leg as he reaches for the peaches so that he can prevent Nick from hooking his leg back. These fine points, which come naturally through practice, help to minimize the risk of Monkey tricks.