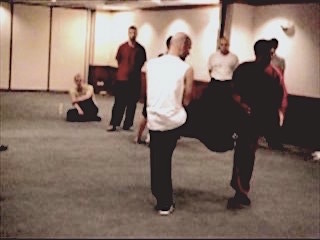 Grandmaster Wong is able to explain the combat application of any kungfu patterns even when he sees them the first time. This is mainly due to his “kungfu enlightenment” after learning the Shaolin Pakua Set from Grandmaster Ho Fatt Nam.

In the Special Shaolin Kungfu Course of April 2007, Grandmaster Wong taught this ability to course participants. He also shared many kungfu secrets with them. These were the secrets masters guarded jealously in the past. Why are the secrets revealed publicly here, accessible even to non-Shaolin Wahnam members?

Grandmaster Wong explains that the deadly techniques were kept as top secrets by past masters because combat at that time was often of life-death consequences. But happily it is not so now. Hence the urgency or justification to keep these secrets is no longer valid.

On the other hand, the standard of kungfu combat has been so debased that there is a real risk of kungfu losing its crucial function as a martial art and becoming merely a demonstrative sport. Hence, if we are sincere in preserving genuine, traditional kungfu, we just have to share some of its secrets. 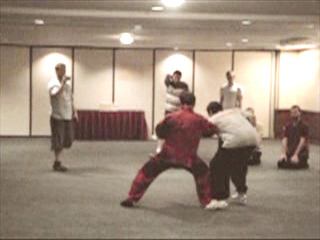 Some subtle combat of applications are shown here. Notice the slight difference in the hand and body movements of “Bow-Arrow Thread Palm” can result in big difference in combat effect. You can not only strike an opponent's ribs with “Phoenix Flaps Wings” but also break his arm or elbow. 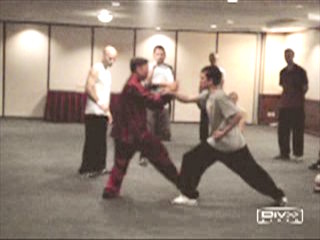 ”Playing with Balls” is of course not just playing with balls. It can be applied to kill an opponent by dislocating his head. Of course, in modern times you must be very careful not to kill him. This will be a deadly counter against someone using “the shoot” on you. You must protect yourself very well while applying this technique on an opponent. You must be covered so that he cannot easily counter strike you.

Dislocating Opponent's Ankle or Felling Him 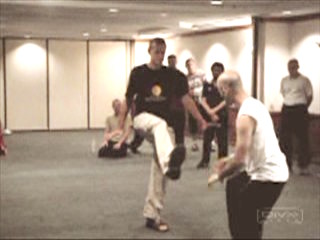 You can apply “Lion Plays with Ball” to counter an opponent's kick from the back. Here it is used to dislocate an opponent's ankle or to fell him onto the ground. Right spacing is very important. Using the False-Leg Stance here facilitates right spacing. Using the Bow-Arrow Stance would place you too far away. 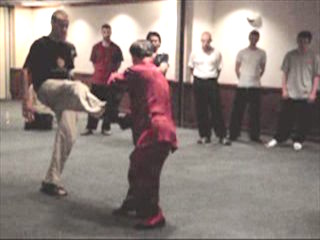 There are some finer points regarding right spacing and hand movement. If you move too far away, you would be unable to catch an opponent's foot. A skillful opponent will turn his body in line with your hand movement as you attempt to dislocate his ankle. In this case, you reverse your turning movement.

Counter against Opponent Grabbing You from Behind 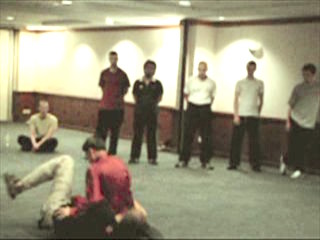 You may also use this pattern “Lion Plays with Ball” to dislocate an opponent's head if he tries to grab you from behind. However, if he has already grab you with both arms and you are unable to turn around to grip his head, you can change to “Fierce Tiger Crouch on Ground” as shown in this video.

Three deadly secrets, which masters in the past jealously guard, are revealed in an off-handed manner here. This is quite unprecedented in kungfu history! Do you know what these three secrets are, even when they may be glaring to the initiated? The fourth secret is shown as a solo pattern, “Heavenly Dragon Descends on Earth”, which is an excellent counter against the “nail-kick” to the groin. It can break an opponent's arm and leg at the same time. 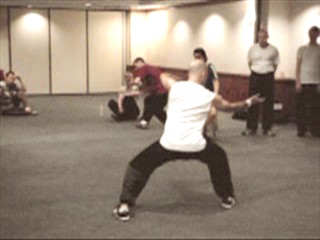 What would you do if an opponent holds your leg and simultaneously kicks at your groin with his toes? Here is an effective counter using the pattern “Heavenly Dragon Descends on Earth”. Use a Horse-Riding Stance instead of a Unicorn Stance if your opponent turns his foot in the other direction.

Functions of the Unicorn Step 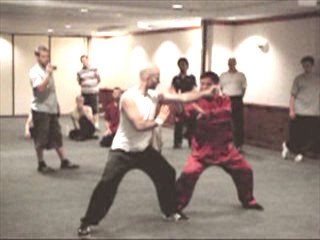 Here is an application of the pattern “Z-Shape Butterfly Palm”. The circular hand movement neutralizes an opponent's attack on the elbow as well as closes his hands. If the opponent retreats, follow closely with Unicorn Step. You may also break his shin with your Unicorn Step. 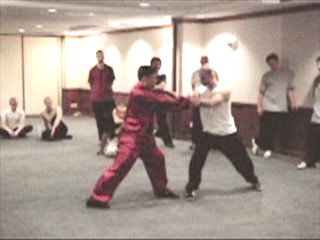 Here is a combat application of the pattern “Golden Dragon Shoots Tongue”. Do you notice that this technique attacks an opponent at three places at the same time (or almost at the same time)? How would you defend against this triple attack, especially when your arm is being held?