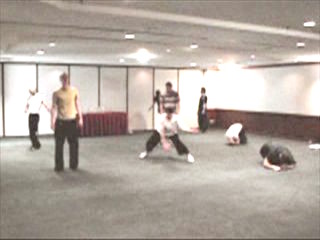 Philosophy is an aspect of kungfu training that has been much neglected. Amongst the most important benefits, understanding kungfu philosophy shows us what our goals are and enables us to be cost-effective in our training.

On the other hand, we should not merely talk about philosophy; we should make it alive, bringing us practical benefits. Don't fall into the mistake in talking about kungfu philosophy, which they may have read in kungfu classics, to impress others but not really understanding what it is all about.

Another aspect that most kungfu practitioners have missed today is chi flow, poetically described in Shaolin Kungfu as “yew foong pai lau” (Cantonese pronunciation) or “flowing breeze swaying willows”. It is a treasure that we still have and greatly benefit from.

The Famous Tiger-Tail Kick of Shaolin 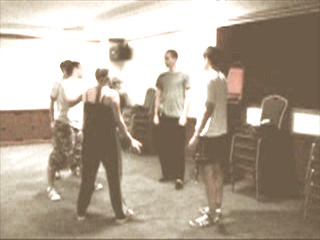 This is a session on kicks. Many people, including many kungfu practitioners, mistakenly think that kicks are unimportant in kungfu. But to employ kicks effectively we must understand their basic philosophy, because there are some innate weaknesses in kicks. There are, of course, advantages too. They discuss the famous tiger-tail kick. 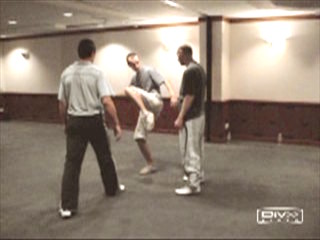 Eugene Butterworth, Steeve and Andy are discussing about kicks. Eugene applies a “whirlwind kick”, which ia an important kicking technique in Choy Ka Kungfu, a Southern Shaolin style well known for kicks. Steve applies a “toe-kick”, which is a variation of the “organ-seeking kick”. 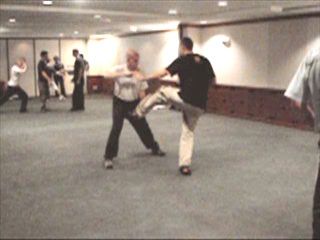 Daniel and George in the foreground are working out a kicking attack and its counter. Georges executes an organ-seeking kick. Daniel responds with a special pattern, “Old Dragon Squats on Ground”, which is not commonly used by most kungfu practitioners. In the background a Monkey is looking for some peaches. 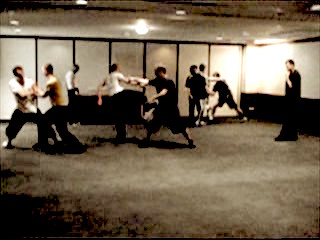 Those who think, mistakenly, that there are no or few kicks in kungfu should be pleased to view this video clip. A variety of interesting kicks are used effectively, including organ-seeking kick, toe-kick and sweeping kick. The responses are remarkable too.

The participants go into chi flow after working out kicks and their defences. Not only there are funny movements, there are funny sounds too. Adam performs some remarkable Dragon movements in his chi flow. Training in Shaolin Wahnam is always full of fun.

The Secret of Great Benefits 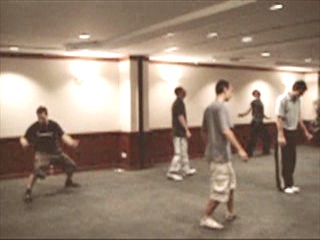 Not only our Shaolin Wahnam practitioners are not tired after vigorous training, they have more energy and are mentally fresher too. Those who have pain and illness will have the pain and illness overcome. The secret of these benefits is chi flow, which the participants are enjoying now. Why are Sifu Roland and Steve hitting themselves? They are in the process of developing Golden Bell.