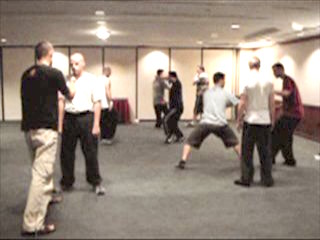 Working out combat sequences is a collective effort, involving both philosophical discussion besides practical application

The working out of the specialized combat sequences is a collective effort where everyone contributes to and benefits from, with Grandmaster Wong giving advice and guidance.

It is an enriching experience where participants can maximize one another's expertise as well as learn from others' mistakes. Not only they gain deep philosophical understanding, more sophisticated techniques and high level skills, they also have much fun and develop strong comradeship. 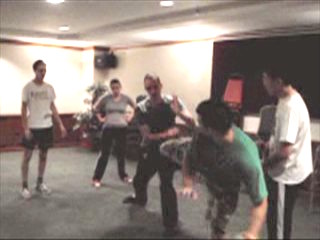 The Tiger-Crane specialists are working out some combat sequences with Sifu Eugene Siterman and Innes Maran in action. They are in the process of working out the two famous Shaolin kicks, the Organ-Seeking Kick and the Tiger-Tail Kick. 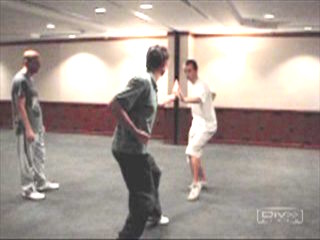 Steve and Eugene Butterworth are trying out a combat sequence they have composed with patterns from their specialized set, the Dragon-Tiger Set, while Andy looks on. It is obvious that the combat sequence here is of a high level than the 16 basic combat sequences.

George and Daniel are discussing philosophical points on combat while the others are putting combat in action. Having a sound philosophy is important. It gives direction and purpose on practice, thus making the practice very cost-effective.

Flowing Characteristic of the Dragon 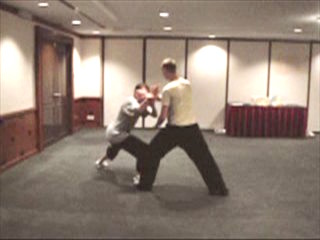 Adam and Peter are working out their combat sequence composed of patterns from the Dragon-Form Set. Their movements manifest the flowing characteristic of the Dragon.

Self Training is Important in Kungfu 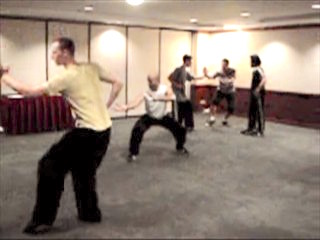 Sifu Anthony is working out the combat sequences on his own because he is the only participant who chooses the Shaolin Pakua Set for specialization. Actually working on your own is a very important aspect of kungfu training. The Pakua Set was originally not one of the specialized sets offered, but due to his request Grandmaster Wong has included it.