PATTERN ANALYSIS OF THE DRAGON-TIGER SET 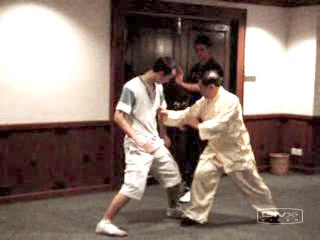 The Tiger-Claw is an integral aspect of the Dragon-Tiger Set. Tiger-Claws are excellent for chin-na though many practitioners may not realize it. It is a compassionate way of combat as it disables an opponent from action but allows him to remedy the injury later on.

Dragon patterns are deceptively soft. In the hands of a practitioner with internal force, strikes from the Dragon-Hand which usually aims at vital points, can cause serious internal damage without leaving external marks.

Martial artists used to rough and tough fighting, may laugh at such seemingly gentle touches of the Dragon-Hand, and that is their business, but it is true that a seemingly gentle strike at a vital point can cause more damage than a powerful punch. 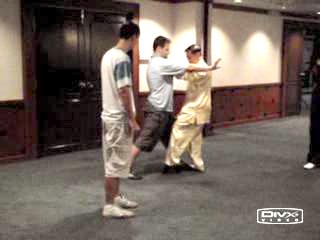 “Dragon and Tiger Appear” is not just for greeting. It has its combat applications too. Here Steve demonstrates one of its applications in releasing a grip on your throat. Grandmaster Wong adds that the exponent may also strike the opponent with his knee. 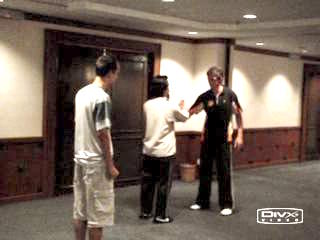 Dr Damian demonstrates using the pattern “Dragon and Tiger Appear” as a chin-na technique. Grandmaster Wong improves the effectiveness of the application using good footwork. This chin-na technique is known as “cheen si sau” (“chan xi sou” in Mandrine), which has been literally and badly translated as “cocoon-hand”. A better and more meaningful translation is “spiral-hand”. 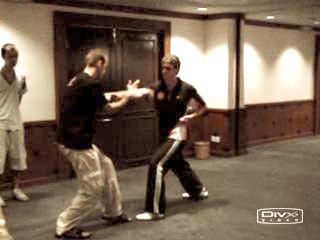 George attempts to use “Dragon and Tiger Appear” as another chin-na technique to break an opponent's wrist by holding it in position with the palm and striking it with the fist. Grandmaster Wong recommends using another pattern, “Playing the Lute”. 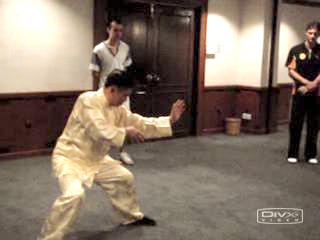 After telling a story regarding “Playing the Lute” and his most senior disciple, Sifu Goh Kok Hin, Grandmaster Wong demonstrates applying the pattern against a thrust punch. It is a chin-na technique employing the principle of “wronging joints”. This application also shows the appropriateness of using the Four-Six Stance. 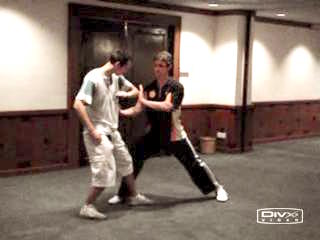 At the start of the Dragon-Tiger Set, a practitioner sits at a Horse-Riding Stance and performs “Double Dragons Emerge from Sea” three times (or more in private training). The main purpose is to develop internal force, especially for the dragon-hand form. Here Steve demonstrates an application of the first part of this “Double Dragons” movement. 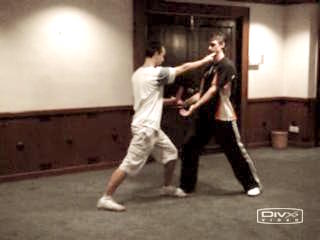 The “Double Dragons Emerge from Sea” movement is quite elaborated. The second part of the movement is to sink the hands down. Here, Eugene demonstrates an application of this second part movement in releasing a double-hand grip and countering with a dragon-form to the opponent's throat. 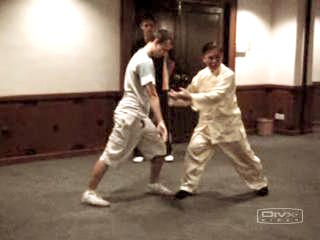 Grandmaster Wong shows a more effective way of releasing from a double-hand grip. Instead of turning the hands upward in a circular manner, as in the previous video clip, you can turn the hands downward, followed with an attack on the opponent wth double dragon-forms. This is the third part of the “Double Dragons” movement.

Of course you can also apply the technique with one hand instead of with both hands. It is a subtle counter against an opponent gripping your wrist. You often strike him before he can realize what has happened. You need internal force to cause decisive injury on an opponent in such close-quarter attacks. 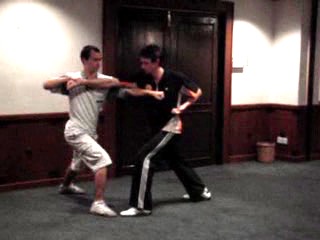 Firstly, Steve and Eugene demonstrate the pattern “Pull Bow Shoot Arrow” from their specialized Dragon-Tiger Set. Then they demonstrate its application. It is simple, direct and effective — characteristic of our training. How would you defend against or counter such an attack?